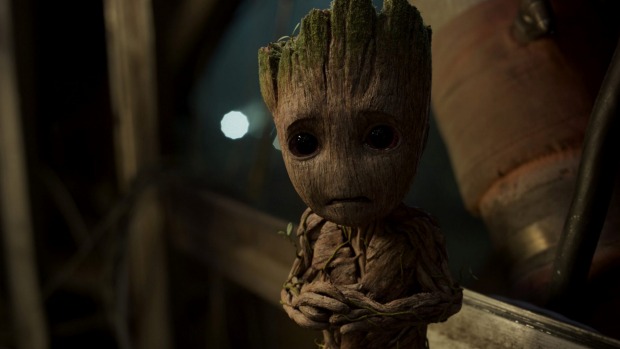 Three years after they shocked the world – and saved the universe – Marvel’s most manic creations are back.

As we rejoin Peter (Chris Pratt), Gamora (Zoe Saldana), Drax (Dave Bautista), Rocket (Bradley Cooper) and the now Baby Groot (Vin Diesel), they are still maverick guns for hire. Their latest mission is to help  well-heeled “collective” The Sovereign rid themselves of an inter-dimensional interloper who is stealing their precious power supply.

However, far from getting the memo about The Sovereign’s “sensitivities”, Rocket decides to steal some of their “batteries” for himself, leading to an all-out assault on the Guardians.

Only saved from complete destruction by a mysterious stranger, the gang crash-land on the nearby planet, where they discover something even more shocking – their hero claims to be Peter’s father.

The young “Star Lord” always knew his pappy “wasn’t from Missouri” but never dreamed that his dying mother’s ramblings that he was from “beyond the stars” could be true. And perhaps Ego’s (Kurt Russell) claims might be too good to be true, but as Gamora helpfully suggests: “If he ends up being evil, we’ll just kill him”.

From the inspired opening dance number to the – count ’em – five end credit sequences, Volume 2 of the Guardians is a rollicking, hilarious and surprisingly emotional blockbusting experience.

Borrowing pages from classic sequels like Empire Strikes Back, Wrath of Khan and, um, Shrek 2, returning writer-director James Gunn manages to go a little deeper and darker than first-time around, without ruining the chaotic charm that made the original film such a crowdpleaser.

So just when the familial schmaltz threatens to overwhelm proceedings, there’s always a dated pop reference or scatological gag to leaven the mood.

As before, the Guardians’ bickering, bantering and battle to be top dog (or raccoon) provide many of the highlights, although this time there’s beefed up roles for the boys (and girls) in blue.

Throw in another superb mood-setting soundtrack (featuring everyone from Fleetwood Mac to Cat Stevens), a couple of scene-stealing cameos and this decade’s Puss in Boots, and you have a true cinematic marvel – an inventive and thoroughly entertaining blockbuster.