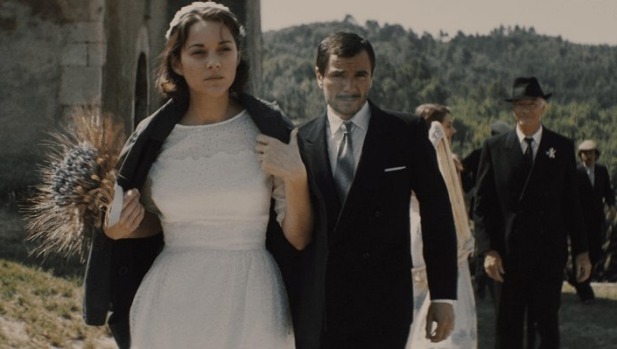 A car wends its way through the cobbled streets of 1960s Lyon. On board are Gabrielle and Jose – Marion Cotillard and Alex Brendemühl – and their son. The boy is about to compete in some prestigious piano competition. But wait! Mum has spotted a street sign. And before you can say “Epargnez-moi les flashbacks s’il vous plait!’ Cotillard is off.

While the handsome 12-year-old is pounding away at his Bosendorfer, Gabrielle leaps from the Peugeot and high-tails it up the stairs of some nearby apartment block.  There to be confronted, we wearily know, by some reminder of whatever great existential angst the next two hours will dump on her head.

The answer, and it’s a doozy, arrives promptly and in a field of lavender, surrounded by swarthy and vaguely leery agricultural types tilling or scything or some damn thing while the yellow sun beats down on their moist, cotton-clad shoulders and the string section works itself into a lather on the soundtrack.

Cotillard, all female glow and threadbare frocks, with the sun perpetually silhouetting her legs, is reintroduced to the screen as the eldest daughter of the farm’s owners. We learn that she has some sort cinematic womanly-hysteria by her habit of waving her body double’s bits and pieces at the camera and trying to seduce one of her teachers while licking – yes, licking – a copy of Wuthering Heights.

Mama – French veteran Brigitte Rouan – for no reason that would stand up to scrutiny, even within the jaw-droppingly slack confines of this barking mad load of old rubbish, decides the only cure for her daughter’s apparent madness is to marry her off to shifty-eyed worker Jose.

This is, apparently, because she has seen him checking Gabrielle out in her shorts and figures that unasked for leering is the mark of a decent and upright chap.

Jose – only a few regrettable facial-hair decisions away from being devilishly handsome and who communicates all of his deepest emotions by either lighting or stubbing out a cigarette – is never going to be enough to keep the coltish Gabrielle in even the general vicinity of happiness.

After a tediously drawn out, creepy and unintentionally hilarious set-up, Gabrielle is packed off to a Swiss sanitorium for her illness. Which by this time has been diagnosed – wonderfully – as some sort of invasion of mind-induced gallstones.

Waiting for her, of course, is the requisite tall, slender, vague and huge-chinned young man that all French romantic dramas eventually have to make room for.

This particular iteration, played by French cinema royalty Louis Garrel, looks like somebody has welded Geoffrey Rush’s nose to Robert Pattinson’s face and then balanced their creation on top of an adolescent giraffe.

Naturally, Gabrielle is head over ovaries for him at first glance, leaving the unfortunate Jose to walk the streets, the beaches and the decks of the house he has built for his wife, puffing ever more furiously at his Gitanes and generally looking ready to kick the cat. If he had one.

At which point From the Land of the Moon‘s descent into self parody is complete and you can happily spend the remainder alternately laughing and jeering.

It may be beautifully shot, occasionally very well acted – Cotillard could get herself filmed reciting the phone book while wearing a sack and I’d find the money for a ticket – and achingly well scored.

But From the Land of the Moon is also the most irritating, border-line misogynist, thoughtlessly self-satisfied and sublimely unaware pile of sun-dappled merde of the year. Eviter.