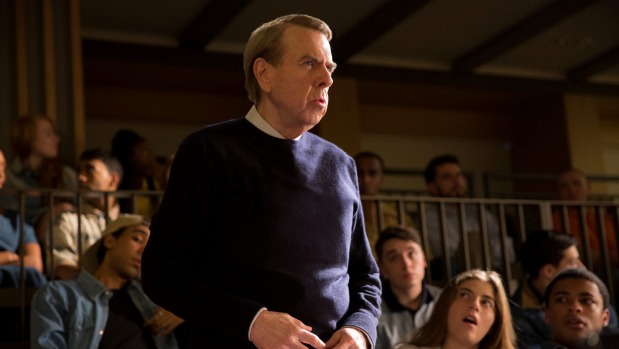 Deborah Lipstadt (Rachel Weisz) never expected to be ambushed at her own event.

And yet here he is – emerging from the shadows to attempt to debate the American  professor of Holocaust Studies in front of a packed house. But just as she won’t engage with “people who think Elvis is still alive”, Lipstadt refuses to argue with  this man – Nazi Germany “scholar” David Irving (Timothy Spall), someone who has claimed that the Holocaust was a myth invented by Jews for financial compensation. However, he has another agenda – serving her papers informing her that he is suing her and her publisher for libel in the British courts.  Irving claims that Lipstadt is part of a worldwide conspiracy attempting to discredit him as a historian. He sees himself as a serious historian, who looks at things from Hitler’s point-of-view, Lipstadt believes that he is nothing more than a “Hitler partisan who distorted the facts”.

Enlisting a crack British legal team, Lipstadt sets about defending the libel claims, knowing that losing it could legitimise Irving’s beliefs. She’s desperate for the survivors of Auschwitz and other places to have their voices heard in the trial, but that’s something her lawyers won’t countenance, preferring the focus to remain on Irving and testing HIS credibility.

Frustrated that she can’t do more to influence proceedings, Lipstadt rejects her counsel’s assurance that she’ll eventually get used to some of the UK’s more archaic ways of doing things. “I don’t mind Dickensian. It’s Kafka-esque that scares me,” she laments.

Based on  Lipstadt’s 2005 book History on Trial: My Day in Court with a Holocaust Denier, Mick Jackson’s (The Bodyguard, LA Story)  first feature in 14 years is a compelling courtroom drama peppered with some truly sublime performances.

Weisz (The Light Between Oceans) is an engaging and forthright lead unafraid to fight her corner, speak her mind, but also adapt her approach and outlook to ensure the trial doesn’t become a damaging circus.

Infusing courtroom dialogue taken verbatim from the trial records into the wider  surrounding storyline, screenwriter David Hare (The Reader, The Hours) has crafted a taut, thought-provoking tale that feels just as relevant more than 15 years on, thanks to the rise of “fake news” and web-based “commentators”.

It also shows the value of working as a team and the quirks and strengths of the British justice system (particularly in comparison with America).

File under “one you must-see”.