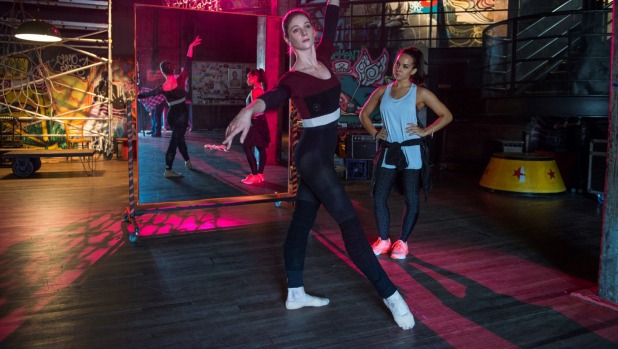 It’s 18 months since her accident and Tara Webster (Xenia Goodwin) is still working the bar rather than the barre.

Slipping on a ball bearing might have crushed her back, but not quite her dream of being a star ballerina. However, with her court case against National Ballet and their failed “duty of care” looming,  an unexpected career lifeline appears. The company’s new artistic director Madeline Moncur (Miranda Otto) encourages Tara to audition for a corp role, but only if she drops the lawsuit.

So when Tara misses the cut, she not only feels betrayed, but determined to show them just how wrong they were. Decamping from Sydney to New York, she sets about resurrecting her career, although as Tara is about to discover, that maybe easier said than done.

Based on the popular Aussie TV series that ran for 65 episodes and three seasons from 2010 to 2013, Dance Academy is a hugely likeable and enjoyable slice of teen drama. While it’s no Black Swan, it feels grittier and edgier than its natural US counterpart – the Step Up series. Series writer Samantha Strauss’ script may contain more than enough soap to whip its young target audience into a lather, but its allied to characters and concerns that feel real, even if it all feels a little too action-packed.

Director Jeffrey Walker, best known for his TV work on the likes of Rake and Modern Family, keeps the wish fulfilment and New York and Sydney tourism video-esque moments grounded by more human moments and impressive dance sequences that are organic, rather than forced into the plot.

Equally impressive are the soundtrack, which mixes Swift with Sia, and a nice line in self-aware cynicism. “I’m not a dying hero in a John Green novel,” quips the potential romantic male lead.

The best teen dance movie since Save the Last Dance.