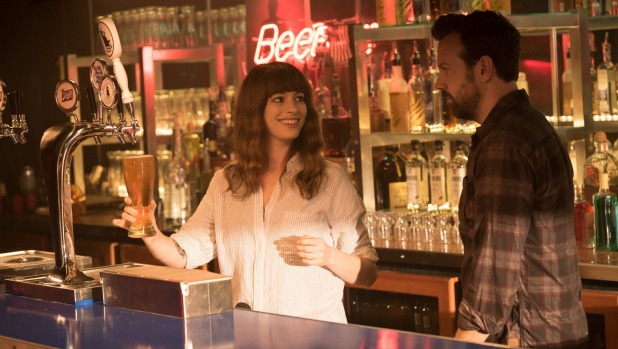 REVIEW: Nowadays, with all these super-hero movies (Will the good guy embrace evil??) and coming-of-age stories (OK, we get it! We all went through it!), one of the best things you can say about a film is that it is original and inventive. Colossal has its flaws in delivery, but with universally committed performances from an atypical bunch of actors and a fantastic core conceit, it’s refreshing to see something at the multiplex which engages and surprises.

Anne Hathaway is Gloria, a young woman whose off-the-rails, unemployed boozing causes her boyfriend (Downton Abbey‘s Dan Stevens) to kick her out of their apartment until she gets her life in order. She heads home to her small town where a kindly school friend gives her a job in his bar and helps her to set up house. Struggling to settle, Gloria spends her days worrying about a mysterious monster attack in South Korea and her nights blacking out after a night on the turps.

The less said about this seemingly random narrative, the better, as Colossal‘s pleasures lie largely in watching something utterly absurd being treated with absolute acceptance by the film’s characters. Hathaway, despite her reputation as a simpering Oscar winner and much-derided singing-actress in Les Miserables, has an admirable career in indie flicks (notably the self-destructive sister in Rachel Getting Married) and here marries her natural doe-eyed charm with a straight-faced credence as ridiculous, and hilarious, events unfold.

She plays against Jason Sudeikis, a comedic actor who does good deadpan, and Tim Blake Nelson (probably still best known for O Brother, Where Art Thou?) whose tortured visage performs most of the role for him. Together, these societal misfits encounter a situation so silly but so charmingly cute we completely buy into it. And with a premise this preposterous, that’s no mean feat.

At times some of the script doesn’t work, with scenes played too long or lines over-delivered (a disappointing accusation to level at Mr Stevens) and with a story this left-field, perhaps it’s inevitable the tonal shifts meander unconvincingly. But the characters are so committed to the truth of the tale, it’s easy to lose yourself in the pleasure of simply watching something fresh, fun and eminently foolish. And you don’t get to do that often enough.