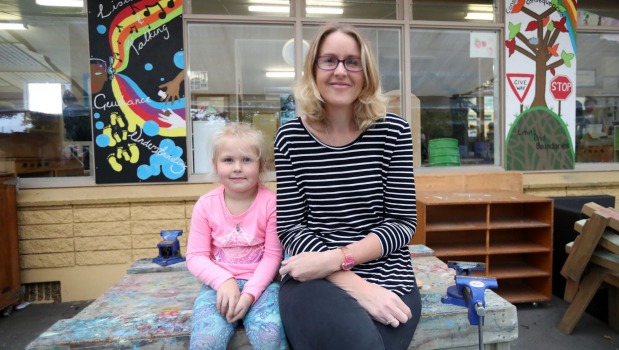 Laura Ingram Kindergarten in Motueka may be bowled to make way for parking if the public library is extended.

Some horrified parents of kindy kids and supporters of the centre have vowed to fight for its retention on the Tasman District Council Pah St site it has long occupied behind the library.

“We want to stay,” said parent Emma Baker, who also attended Laura Ingram herself as a child. “This is a part of history. This is the kindy I went to and now my second child is going here. The birthday chair is the same chair that I sat in.”

Laura Ingram Kindergarten opened in 1961. It is licensed for 44 children and is full. There are five teachers, an administrator and two teacher aides working in full or part-time positions.

The kindy’s umbrella organisation, Nelson Tasman Kindergartens, has bought a house next to Motueka South School in case it needs to establish a new kindy. However, there is concern that some families whose preschoolers attend Laura Ingram Kindergarten don’t have vehicles and wouldn’t be able to get their youngsters across Motueka to the potential new site.

Laura Ingram supporter and former teacher at nearby Greenwood Kindergarten, Jeni Platt, said it would be difficult for many people if the Pah St site was closed.

“Many families that come here don’t have transport,” Platt said. “We need to convince Tasman council to give us a lease, then the thought of moving wouldn’t be an issue.”

Platt was referring to news revealed to some parents and supporters this week that Laura Ingram hasn’t had a secure lease for many years.

TDC community relations manager Chris Choat said the agreement the council had with the kindy was “temporary in nature” reflecting the “uncertainty” with the site “and priced accordingly, i.e. $200 per annum”.

“The site’s future is directly linked to the possible extension of the library,” Choat said. “How and what the land is used for i.e. building, car park, external storage etc is equally uncertain.”

Motueka Library has long been earmarked for expansion. Its redevelopment would also affect the Senior Citizens hall.

Choat said the kindy’s management had known since the mid 1990s that its site was uncertain while the council had an agreement with the Senior Citizens Association that it would be catered for in any redeveloped library.

Adding to the uncertainty is a Vision Motueka-led proposal for the construction of a new library as part of a “community hub” development, suggested for Decks Reserve.

Choat said until the council, Motueka Community Board and community groups reached a decision about the future of the library, the kindy’s future would remain unclear.

“The council is reviewing the future of the Motueka Library as part of its Long Term Plan 2018-28,” he said.

Work on a draft Long Term Plan has started. It is scheduled to go out for public consultation in March/April 2018.

Nelson Tasman Kindergartens chief executive Trish Casey said the association needed to invest about $300,000 in the Laura Ingram site to extend the office area and tackle problems with flooding in the playground.

“But we can’t because we have no security of tenure,” Casey said.

Options for relocation were considered and a house in Courtney St, next to Motueka South School, had been purchased but “to get from having a site to having a kindy is a very long way for us”.

Although the association had bought the Courtney St house, securing a lease for the Laura Ingram Kindergarten site and investing in that property would be “by far the easiest option for us”.

“From our perspective, we just want to provide for the community,” she said.

Baker said she did not believe the wider Motueka community knew of the threat facing the kindy.

“We will see what we can do to get it out in the community,” Baker said. “We want a lease.”

Many people had strong links with the kindy. As well as being a former attendee herself, Baker’s son, Kyan, 10, had attended and her 4-year-old daughter, Arabella, was now enrolled.

Lomas said she could walk to the kindy and would be reluctant to travel across town to a Courtney St site, especially with a child enrolled at Parklands School, which was just across Pah St.

Baker said concerned parents and supporters of the kindy had arranged to meet with Motueka Ward councillor David Ogilvie and Motueka Community Board member Claire Hutt on Friday to discuss the issue.

A Facebook page – Save Laura Ingram Kindergarten – has also been set up.