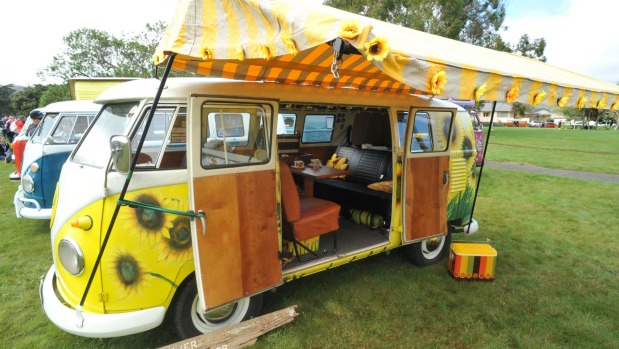 OPINION: Lower Hutt echoed to the rattle of over 150 aircooled engines over Easter as it played host to “Das Reboot,” the Qualitat New Zealand Volkswagen Nationals.

This year it drew over 1500 people to see Beetles, Kombis and a couple of immaculate KarmannGhias.

As interesting as the vehicles were the stories behind them.

Kelly and John from Hamilton first met when they were both ring-ins for a hastily organised Kombi trip around Europe in the early 1980s.

READ MORE:
* Cryptocurrency in crossfire as surge in dodgy transactions reported to police intel
* Mike O’Donnell: Which Kiwi tech companies will ‘break on through to the other side’
* Mike O’Donnell: Companies that are good under the hood

Tania and her family found themselves living in their pop-top camper for several months after the second Canterbury earthquake.

Volkswagen lucked out with the Beetle (or Type 1 as it was originally called).

It was the first civilian car that the Wolfsberg-based company ever made, enjoying 65 years in production.

Volkswagen was formed in 1937 with a philosophy around building a car that could carry four people, travel at 100kmh and be cheap enough for an average family to afford.

And the Type 1 manifestation hit the mark so well, it guaranteed commercial success for the next 60 years.

Sadly, the Blockchain philosophy has had the opposite experience, with its first real market manifestation being a cryptocurrency called Bitcoin.

Blockchain is a decentralised digital ledger that does away with the concept of a conventional financial services company or registry needing to act as intermediary in business transactions.

Instead, it uses a peer-to-peer eco-system of people and relies on collective self-interest to keep data righteous.

And no-one has ever figured out a way to hack it, not something you can say about traditional databases.

First mooted in the early 2000s, the concept of a decentralised ledger to facilitate transactions between untrusted parties was articulated by a shadowy figure called Satoshi Nakamoto in 2008.

In 2009 the Bitcoin project was launched, as a first example of the philosophy. The three headline benefits of Bitcoin were liberty from banks, low cost and security.

While it gained some legitimate users, it was also embraced by underworld types who liked the idea of being able to pay and be paid off the grid.

In the ensuing years Bitcoin came to be associated with drug dealers, gun runners and worse, so simply failed to be relevant to respectable businesses.

Sadly, many understood Bitcoin and Blockchain to be the same thing.

Fortunately, here in New Zealand there are a group of Blockchain geeks who understand the difference and are resurfacing the philosophy as a way to deliver innovation and competitive advantage to godzone.

The group is diverse and includes software evangelists, mainstream bankers, major retailers and even a few accountants.

What they share in common is a belief in Blockchain’s ability to deliver a trust layer across the communications layer of the web, and the potential for this to release economic growth.

It offers the ability to revolutionise the likes of conveyancing, retailing and contractual fulfillment; none of which would need a trusted intermediary in the middle.

In two weeks’ time, they are getting some of the biggest players in the world to converge on Auckland for TheBlockchain NZ, a global conference.

The event is to help people understand how Blockchain and smart contracts will change and disrupt almost every business sector.

It’s also keen to position New Zealand as a great place to lead the Blockchain assault from.

But without any centrally backed cryptocurrency, it’s largely manacled.

This means that unless New Zealand can harness its agility and disrupt its own markets, it’s going to suffer longer term.

To do this, there needs to be some sort of officially sanctioned trial which could focus global attention on New Zealand as a leader and incubator.

First the Government needs to get behind what it sees as a risky venture.

The Blockchain faithful tell me few within the decision-makers of government have enough knowledge here to make informed decisions.

The good news is the recently appointed finance minister is also the minister of creative disruption, in my experience.

Second, the Reserve Bank needs to get on board. Only a state-backed cryptocurrency will be able to deliver sufficient trust to make Blockchain based ventures commercially acceptable.

Lastly, the many possible business cases needed to be boiled down to a couple that offer such irresistible functionality that they face the best chance of success.

The VW Nationals Conference was subtitled “Das Reboot” and that’s exactly what the Blockchain conference needs to do in two week’s time.

Mike “MOD” O’Donnell is a professional director and e-commerce manager. His Twitter handle is @modsta and he’s hopeful that Blockchain will stop his wife finding out how much he’s spent on his 1971 Kombi.