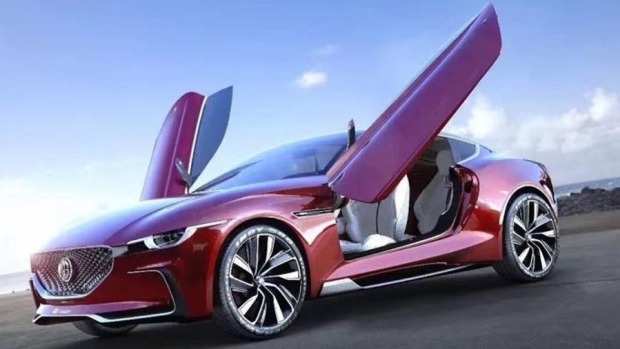 MG is set to return to its roots with the company’s first sports car since the TF roadster.

The famed British brand revealed a stunning Tesla-inspired electric coupe concept ahead of its official debut at this week’s Shanghai motor show.

It has issued a series of images and limited details of the butterfly-doored E-Motion concept, claiming the “electric supercar” will be able to accelerate from 0-100kmh in under four seconds while offering a range of over 500km between battery recharges.

It says the vehicle has “black technology only seen in science fiction films” and that it previews an all-new modular electric vehicle architecture developed by its parent company, Shanghai Automobile Industrial Company (SAIC), that could see the E-Motion become a production reality within 18 months.

The initial images make it clear that the two-door silhouette borrows heavily from classic European sports cars while the front-end has a diamond-patterned grille similar to the Mercedes-Benz CLA and LED headlights with a light signature like that of the Mazda6 – although MG says the intricate design has been inspired by the London Eye ferris wheel. The rear-end is more unique with tail lights that cascade over its broad shoulders.

Interestingly, the E-Motion also features a rounded MG badge at either end, a significant departure from the iconic octagonal logo that has adorned its cars since the brand was founded just over 90 years ago.

MG has yet to reveal full mechanical details, or any images of the car’s interior but says it will be equipped with Intelligent Interconnection Systems which is “able to bring youths with perfect driving experience.”