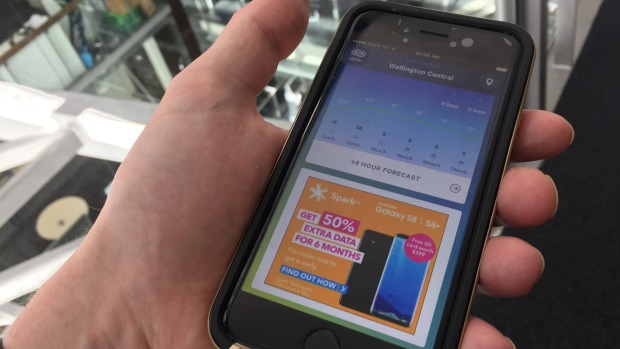 The MetService is under fire for allowing advertisements on its newly-upgraded smartphone app, with some users complaining on social media that the adverts it dishes up are too intrusive.

The app has received only “two stars” out of five on Apple’s iPhone store, with advertising the biggest gripe since the upgrade.

Not all the feedback has been negative, but users have complained in particular about a full-page advert showing on their phones when the app is launched.

MetService spokeswoman Jacqui Bridges said those ads were in effect a holding page that was only briefly displayed, once a day, while the app was loading.

The full-page advert disappeared once people pressed a “continue” button, or regardless after a few seconds, she said.

The MetService previously charged $2.69 for its Android app, and $2.99 for the iPhone version, but has introduced adverts as a trade-off for making them free of charge.

The state-owned enterprise was one of the first public sector organisations to accept advertising on its website in 2004 and it quickly became a major earner.

It said in a ministerial briefing late last year that it was a “key revenue generator for the company”.

That was despite a blip in 2011 when scammers managed to slip malware into an online ad on its website, which infected visitors with a computer virus.

Bridges said the MetService’s advertising revenues were commercially confidential because it was competing with the likes of Fairfax Media, which publishes Stuff, and NZME.

But one clue to its significance is that the MetService has donated more than $1m of advertising space to charities and non-profit organisations since 2011.

Because the Android and iPhone apps are now free, the MetService has agreed to refund customers who paid for them after January 1, if they can provide proof of purchase.

The charges had become a barrier to downloads and advertising allowed the MetService to make the apps available at no cost to users, it said in an explanatory note on its website.

“We’re aware some people feel strongly about advertising and would like to access ad-free weather content. Some people are prepared to pay for this. Unfortunately there isn’t an ad-free option at this stage,” it added.

Bridges said a “paid” ad-free app was a future possibility, depending on feedback.