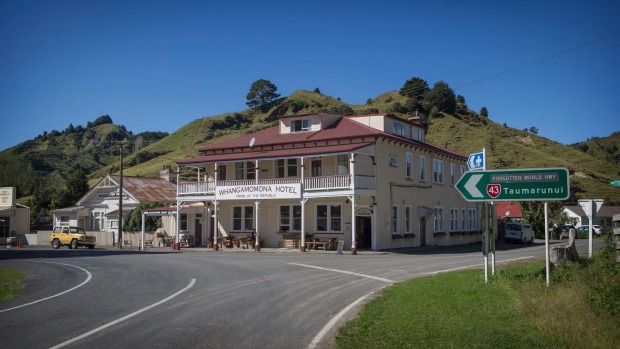 It was supposed to be a shortcut from Te Kuiti to New Plymouth. That’s what it said on Google maps. But it wasn’t any shortcut at all. It was a longcut. It was the longest cut I had ever made. And I didn’t even make it all the way. I ended up stopping in Wangamania or Whangamomoaner or some place that may or may not actually exist just to reassure myself I wasn’t completely lost.

I walked into the pub. Not because that was the place I wanted to go but because that’s the only place there is to walk into in Whangamomini.

I was glad I did. The pub was fantastic. Straight out of a time warp from way back in 2007. My phone was in my hand so I began taking pictures for my travel blog. It was so epically real it was unreal. It was probably even ironic. I hoped it was ironic. Even though I have no understanding of irony, irony is en pointe and that’s what I am.

So I was already counting the likes I would get after I posted the pub pics online to Tumblr when I realised there was no signal. None at all. Not even the smallest of the small bars. My smart phone was useless. It suddenly became hard to breathe. I was existentially terrified.

Out of pure and understandable panic I turned to the people nearest me. They were facing each other and moving their mouths up and down like fish. It was weird. I said “hey, there’s no signal” to snap them out of it.

One of them said “You’re right mate.”

He said “Let’s hope it stays that way.”

I couldn’t really be sure he knew what he was saying. He was basically putting insanity into words. It was hashtag awkward and I said as much.

“Hashtag confused,” I said. “Hashtag am I dreaming?”

I got out of there as fast as I could. It was obvious we weren’t living in the same world. I didn’t feel safe.

Out of the blue the car started driving funny. It kept veering to one side. It was tots crazy so I pulled over to Google what my problem was. It was no good. There was still no signal.

I got out of the car to look for some bars. There were none. A man in a truck pulled over and wound down his window.

“Want a lift,” he said, mysteriously pointing to my front right tyre.

I didn’t want a lift. I just wanted some bars. It had been about six hours since my last status update and I was worried my Facebook friends might think the worst had happened. Might think I had done nothing worth posting about when I had, I had, I really had.

“No signal here mate,” he said.

I decided then I really was dreaming. I had the vague feeling I could use the word Luddite to describe the dream man but without my phone working to confirm it was the right word I wasn’t taking the risk.

I got in my car and locked the doors. Eventually he drove away.

If I rotated the steering wheel two times to the right I could drive a straightish line. It was a good feeling to have solved my own problem but I was defs going to instant message  the rental people about the issue when I got to town. Because, even though I solved the problem I could see sparks and hear a screeching noise from where my front right tyre  was and it was really annoying.

It was so annoying I stopped near a sign that said Douglas or something and that’s when I saw Mt Tarakini, though without Google I couldn’t confirm that was the mountain I was seeing.

Whatever it was called it was beautiful. I opened Instagram on my phone and took a picture and then washed it with a filter to make it look like the pictures I had seen from the olden days of 1974. I’m not joking. It brought a tear to my eye. Especially when I couldn’t post it. All its beauty was now wasted. All the time I had spent looking at it was for nothing. Stupid mountain.

At last some reception. It all felt like the end of a nightmare. Maybe it was the beginning of a new nightmare. How else do you explain the glockenspiel? Status update: Still not in real world.