“We have to govern by treating every single citizen equally” reads the tombstone.

HUGE CROWDS TURNED out in Derry yesterday for the unveiling of Martin McGuinness’ gravestone.

Suffering from ill-health McGuinness had resigned from his role in early January over the ’cash for ash’ scandal.

Thousands lined the streets of the city for his funeral procession from McGuinness’s Bogside home.

According to The Irish News a crowd of several thousand people attended yesterday’s annual Derry Sinn Féin Easter commemoration at which the headstone was unveiled.

There were claps and cheers as the purple covering was pulled back to reveal the tombstone. McGuinness’ son, Emmett, also carried a photograph of his father.

A quotation from the former deputy first minister features at the bottom of the gravestone: “We have to govern by treating every single citizen equally.”

It also has the message: “Forever Loved, Bernie (McGuinness’ wife), children and grandchildren.”

The footstone on the grave states: “I love you with my whole heart and soul.”

Laying a wreath in the cemetery, McDonald said McGuinness “lead from the front, he took risks for freedom and risks to build the peace”. 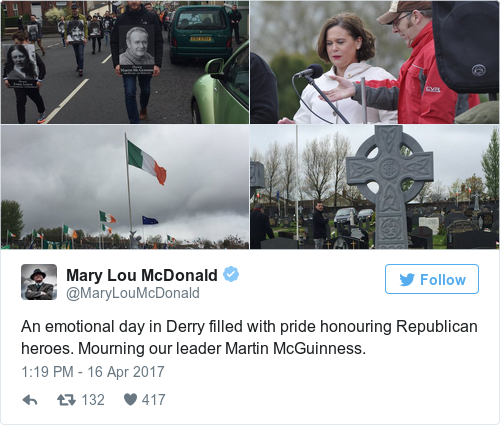 The sentiment comes as Sinn Féin leader Gerry Adams states that Irish unity “makes sense”. He said his party is interested in establishing a Dáil committee on Irish unity.

“This could bring forward proposals for what a United Ireland might look like, and how the Irish state needs to plan for reunification across all areas of the economy and society.

“There is also a need to discuss a referendum on Irish unity as set out in the Good Friday Agreement – a need to agree on how this can be held and how it will be won. Of course that will require the support of other parties and independents in Leinster House and Sinn Féin looks forward to discussing this with everyone there. We will also continue our endeavours to persuade unionism of the merits of an agreed Ireland,” said Adams.