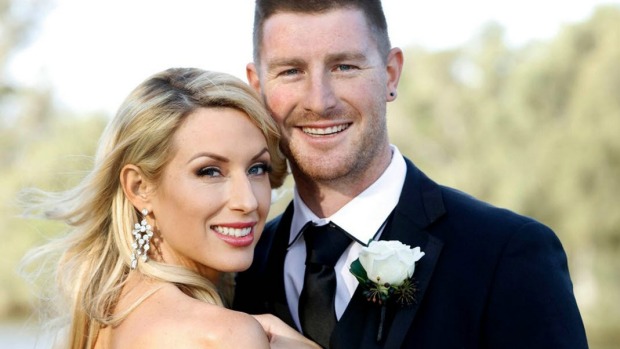 Today marks the second to last episode of Married at First Sight, season four. It is not yet time to celebrate, however.

What I thought would be two hours of my week taken up by the show is now three.

However, it is not Wednesday night yet, lets pick up where we left off last week.

Nick is still devastated by the news that his dad might have motor-neurone disease.

This has meant his plans to move to Perth have gone out of the window.

Instead the onus of moving falls to Sharon who’s visiting Melbourne to see if she can make it work on the east coast.

“If she doesn’t want to move to Melbourne, I might lose my relationship with Sharon,” says Nick extremely worried.

Sharon has many doubts about moving to Melbourne despite Nick assuring her he will do everything in his power to make the transition as smooth as possible.

However, Sharon knows if she wants to stay with Nick she needs to make the move.

After much  to and fro Sharon says the magic words Nick has been waiting to hear.

“I’m 99.9% confident to say that I’m happy to move for you Nick Furphy,” she professes.

The pair are ecstatic and Sharon even lets rip the ‘L’ word.

“I love you too,” says Sharon.

I wonder how long it will take for their rollercoaster of love to roll to a stop.

Simon and Alene have stuck to their word and embarked on their adventure to see each other every weekend.

This time it is Alene’s turn to visit Simon and it appears absence has made the heart grow fonder.

The pair are giggly and are all over one another like one of those sickening happy couples no one likes to see.

“How are you liking it so far, this distance thing?” asks Alene.

“I’m sick of it to be honest,” says Simon sending Alene’s head spinning.

Of course the audience know Simon means it in a ‘i’m an old fella that doesn’t like this ‘technology’ business’ sort of way.

Unfortunately Alene is worried it means he is getting sick of her.

Despite wanting to still  be with Alene, Simon is finding it difficult to express his feelings again.

However, he confesses his feelings have only but grown for Alene.

And like every other episode all is well in the world of Salene.l

Last episode, Nadia decided the best thing she could possibly do is front up to Anthony in person after he snubbed her over Skype.

It turns out Anthony is having second-thoughts which baffles me considering Nadia still likes his egotistical rear-end.

Nadia says she doesn’t necessarily want love from Anthony but a positive signal would be nice.

However, that is the last thing she is going to get from Anthony, who is in a worse mood than a tired, hungry toddler

“Are you for real? You think I have a rug, which guy my age has a rug Nadia,” says Anthony clearly exasperated over the simple mention of a rug.

He then adds that Nadia would dress up for the opening of an envelope, trying to insult her after she purely asks whether she would need anything for the beach.

If someone said either of those things to me, I would be out of there faster than you could say Anthony sucks.

As they finally make it to the beach they get down to the nitty gritty, will Nadia be moving.

“If I was to move I’d need to know that we are solid,” said Nadia.

“I still think there is still so much we need to learn about each other,” says Anthony.

“Do you have reservations?” she asks.

Despite insult after insult the pair have a cuddle and make up.

I can only pray Nadia let’s the dude go, he’s a waste of time.

Last week Andy showed his true colours after booking a holiday to Nepal without telling Vanessa.

Vanessa understandably got a bit upset when he added she would just have to wait around for four months until he came back.

Andy has now turned to his friends, including Tomo, to see what he should do with their relationship.

“I think it’s a little bit selfish, I think there needs to be a little bit of give and take, said Tomo referring to Vanessa.

Well if Andy is taking four months to travel the world and do his own thing and giving Vanessa no clue of where the relationship is headed, I wouldn’t call it fair.

Vanessa turns to her father for advice, who has been the voice of reason throughout the experiment.

However, his words have fallen on deaf ears, “I feel like Vanessa has made a decision, she just hasn’t said out loud it isn’t going to work,” said Vanessa’s dad.

Vanessa has gone to visit Andy on the GC, who is standing at the airport with some limp flowers and a sign like he is a chauffeur that has never met her in his life.

She appreciates the gesture, as average as it may be because flowers are flowers.

The pair go for some fish and chips, something that should be a happy occasion.

Instead the lovely deep-fried meal has been ruined by a confrontation that the pair are never going to resolve.

Vanessa tells Andy she needs more interaction and Andy says he is just not that way inclined.

“What I see is I am not adequate enough for your needs” says Andy.

It becomes clear like Vanessa’s dad had said, she has already made up her mind.

Andy holds back the tears and asks “do we stop it at friends?”

“I don’t feel like we are able to understand each other,” says Vanessa.

“I think you are amazing and I think you have heaps of good qualities but I have to be true to myself and it is just not what I am looking for in a relationship,”

And that’s the end of that.

Four becomes three… until tomorrow that is.

Married at First Sight Australia airs Tuesdays and Wednesdays at 7.30 on Three