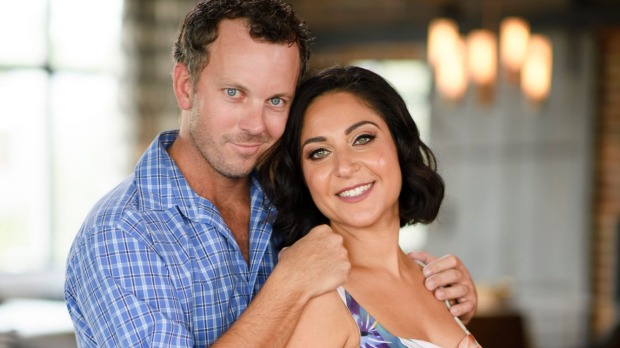 The time has come to celebrate, it is the end of Married at First Sight season four. Finally.

I was 110 per cent over this show two weeks in so you can only imagine how I feel now we are in week ten.

It was never so much the concept of the show but the ridiculous circus the whole thing turned into.

For example: To mark the occasion, the producers have turned the finale into a two hour spectacular.

Watcher Peter Lloyd was baffled as to how they managed to fit “30 minutes of entertainment into 90” on a good day.

Well, Mr Lloyd, they will now attempt to fit 30 minutes of “entertainment” into two hours, can you imagine.

I have decided to split this re-cap into two parts – the dinner party and the expert reunion, just to keep it simple.

We don’t need to be here all day.

Although I usually dread a drama-filled dinner party, tonight was different.

Everyone, including Lauren, has returned two months down the track to catch up and hopefully rip each other to shreds.

Best of all with this episode comes cyclone Debbie… who is no doubt still ripping through the pacific in search of her Polynesian man.

Andrew enters the party immediately looking for his bros to back him up because without them he is as weak as a elderly arthritic woman.

“I’m obviously not looking for any drama with anyone tonight,” says Andrew.

However we all know this dude is a serial liar so the likelihood of him not wanting drama is slim to none.

Across the room, exes Sean and Susan spot each other and all but run into each others arms.

After some extensive flirting, Susan explains to Scarlett that her and Sean will be taking an overseas holiday together despite still being broken up.

She then says Sean brought her an eternity ring and yes they still are broken up.

If anyone could please explain to me what on earth is going on here I would be grateful because this pair are harder to figure out than a rubik’s cube.

Nick and Sharon enter the party at the same time, indicating they are still together.

They are apparently taking ‘baby-steps’ towards moving in together so her commitment to move to Melbourne hasn’t eventuated.

I can’t talk though, it took me weeks to move to Auckland and I am neither a home owner nor a business owner.

Scarlett has had ten too many drinks and has latched onto another one of Cheryl’s exes, Andrew.

She is flirting like a silly teenage girl and Andrew is lapping it up like only he would.

Cheryl arrives and makes it clear she isn’t suffering any fools tonight.

She not so stealthily avoids a forced hug from Jonathan and then snubs Andrew as she rightly should.

She then makes a beeline for runaway bride Lauren like a moth to a flame.

Nadia arrives sans Anthony and I can only hope that means they have broken up.

Susan asks the question on everybody’s mind… what happened?

“As soon as the cameras stopped rolling, he dropped me like a hotcake,” says Nadia who looks significantly better off without him.

Apparently Anthony told Nadia the next day that he no longer liked her and saw it going no where.

“I don’t even know who Anthony is but he obviously doesn’t have enough balls to be here to tonight to face Nadia,” says Lauren.

Despite missing the entire experiment Lauren seems to be pretty onto it.

However just when everyone thought they had escaped the wrath of Anthony, he turns up.

Nadia is no longer hungry, which I can understand because I feel sick at the sight of him too.

Anthony rearranges the seating and plops himself down next to Nadia for a chat.

“S… just got real,” says Lauren again calling it like it is.

Anthony is trying to make small talk with Nadia but she isn’t having a bar of it.

“I just want to say that I am sorry…” said Anthony

Anthony doesn’t really take the hint despite everyone knowing that ‘K’ is the universal sign for end of conversation.

Eventually he moves along and starts spouting his version of events (where he is an absolute saint) across the other side of the dinner table but little does he know, Nadia can still hear him.

“He will say anything because the cameras are rolling” says Nadia to Cheryl.

Luckily for her, even on camera Anthony comes across as a not very nice person (to put it lightly).

Cheryl decides to take Scarlett aside to confront her about her about the texting scandal.

Scarlett storms off because she is very drunk and very angry that Cheryl called Jono ‘Jordan’.

“You’re the fakest girl I have ever met bye bye darling,” says Scarlett flipping her hair.

“The only things fake about me is my boobs and maybe some of my lips,” said Cheryl with conviction.

Scarlett walks back into the party and grabs her bag and leaves.

Possibly the best part of the night is when Lauren finally gives Andrew a piece of her mind.

So far her observations have been pretty spot on so when she tells Andrew he is a “cocky little p….” he can’t deal.

“You can’t accuse someone of being cocky in a cocky way” says Andrew trying to come back from the most honest thing I have heard all series..

“You are arrogant and full of yourself, you need to pull it down a few cogs… don’t be a f…… w…..” says Lauren.

The dinner party ends and Lauren and Cheryl emerge as the real winners.

Hopefully the reunion with the experts can give Nadia the chance she needs to put Anthony in his place.

Apparently the dinner party wasn’t drama-filled enough so the couples have come together with the experts (aka the people responsible for their misery) one last time.

Everyone shows up except Scarlett who is probably nursing the hangover of all hangovers after completely embarrassing herself on national television.

To set the scene the experts show everyone a quick montage of their beautiful wedding days.

But they make it awkward by bringing up how Anthony reacted when he first saw Nadia.

He makes her so upset she walks out because as we know, Anthony is a different person on camera to off.

“At the end of the day, he says all the right things but there is no substance to it,” says Nadia.

To ease the tension, the experts bring John and Debbie to the couch to discuss their ‘relationship’.

They show several clips of Debbie demonstrating her ridiculous obsession with Polynesian men including her toddler-sized tantrum about getting no Polynesian and no gluten free cake.

Everyone is laughing, including Debbie, who can probably see how ridiculous she is now. But no, instead she just wants to point out that she also asked for someone with Italian heritage or alternatively someone from Canada or Texas.

Simon and Alene step up to the plate to show how the experiment can actually be successful.

The pair are still very much in love and show no signs of it letting up any time soon.

In stark contrast, are the most controversial couple of the series Cheryl and Andrew.

The experts bring up the ‘boys night’ that sent their relationship into a flaming mess.

FINALLY the footage of the boys night is shown and it has got Andrew squirming in his seat.

Anthony tries to justify it all by saying “the music made it so much more dramatic than it was”.

But I trust Anthony about as much as I would trust Hitler so….

Cheryl thinks Andrew stuck around in the competition not for her but for the brotherhood.

Andrew tries to justify it all, but his ‘brothers’ Sean and Simon throw him under the bus. “Those kinds of comments, you can’t come back from that,” says expert John Aiken.

Andrew tries to play nice and expresses a wish to keep in touch with Cheryl in the future.

When expert John asks whether she wants that too, Cheryl says “no probably not” with a smirk.

Lauren bursts out laughing and so do I, shame Andrew.

Last to take the couch are Anthony and Nadia.

Anthony states his only regret would be the way he spoke to Cheryl.

Nadia jumps at the chance to bring him down a peg or two, “Is that because of the way she [Cheryl] feels or the way you were perceived?”.

Cheryl smirks and we know he has said this to look good for the cameras.

The experts then bring up the way Anthony dropped Nadia and ran away like the child he is.

With tears in her eyes, Nadia tells Anthony exactly how it felt to be dumped by a man who only pretended to care for her for eight weeks.

She is crying, Susan and Alene are crying and even I feel upset.

Anthony says he didn’t feel any sort of love towards Nadia and at that moment even his brotherhood don’t have his back.

It is safe to say Anthony had been shunned to hell for eternity, where he belongs.

After that emotional rollercoaster of an episode, I feel bittersweet.

On one hand I am upset, some of these people seemed like they genuinely meant well. Instead they ended up embarrassing themselves in front of a global audience.

On the other hand I don’t have to include the channel details at the bottom because the show is well and truly finished.