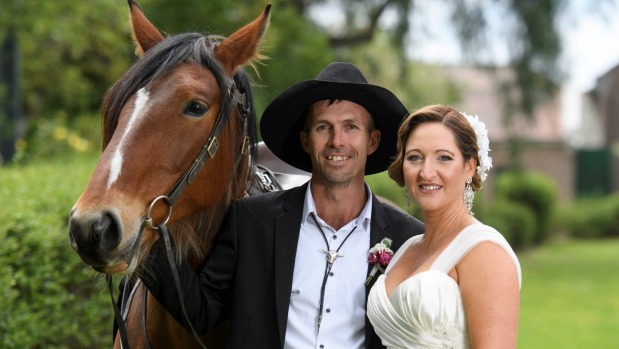 Why have we not woken up from this Married at First Sight Australia nightmare yet?

The ‘reality’ show has finally reached its final set of commitment ceremonies. But hold on, there are still three more episodes to go.

I had been promised the end was last week and yet I’m still here writing about this show.

Susan and Sean and Anthony and Nadia need to decide whether they want to be stuck with their respective partner for the rest of their lives.

If Nadia had any sense at all she would walk away from Anthony.

However, from what I have seen in the last few weeks, Nadia may never come to her senses.

Sean and Susan continue with their eternal battle of long-distance love.

“I’m not afraid to admit I do get lonely sometimes,” says Sean.

Well Sean, I can’t say I am surprised. You live in the middle of nowhere, with nothing but your horses to keep you company.

There is such a thing as living on a farm without having to be hours away from civilisation. People do it, I did it, I believe you can do it too.

Susan needs to decide whether her love for Sean is enough to overcome being away from pretty much every other human being but Sean.

Although Sean’s dad Glen has gushed over Susan and how happy she has made his son, Susan’s friend Gemma is just not convinced it will work out.

“I just don’t see how this can be something worth while for you,” referring to Susan being with Sean on a farm.

“So no because it’s just not something you want in life,” sounding like a female Anthony.

Can you just not Gemma? No one needs your negativity, most of all Susan.

Back in Brisbane or wherever Nadia is from, she is still tossing up on what her decision should be.

In Sydney, Anthony has met with his friend Hugh to discuss the relationship.

“I can’t foresee there being any huge issues,” says Anthony with great confidence to his friend.

“Has she decided to move to Sydney yet,” asks Hugh who just like Anthony, assumes Nadia will pack up and move.

“I’m confident that she will feel the same way and that doesn’t make me nervous because I know Nadia,” says Anthony with a terrifying look in his eye.

It is time for the all important commitment ceremonies everyone has been hyped for.

I think Married at First Sight missed a perfect sponsorship opportunity with Napisan with the number of pristine white dresses on show.

Nadia approaches Anthony and for a second I  forget everything I have seen and he seems like a genuinely nice guy.

“Did you miss me? I missed you. I did,” says Anthony like an excitable child.

“Thanks,” says Nadia and I almost fall off my seat. Do you need some aloe for that burn Anthony?

Anthony tells Nadia she makes him want to be a better man and that he wants to stay with her.

But I really only came here to see Nadia decide the fate of the relationship.

“Everything became overwhelming and I questioned everything about us,” admitted Nadia.

I was very excited for the possibility that Nadia is going to shame Anthony on national TV and then I was immediately let down.

“I’ve realised that in the end, the good outweighs the bad.” says Nadia to my absolute disappointment.

I am not happy with Nadia’s decision but then I remember it is just a TV show and I don’t actually care what she does.

Perhaps we will have a happier ending with Susan and Sean, the couple that fell in love at first sight.

Sean looks like he is channelling Pharrell in that ten gallon hat and I love it. “My heart wants nothing more than to ride off into the sunset together forever,” says Sean indicating to Susan he wants to continue.

“You committed yourself to be my husband and for that I completely love you,” says Susan.

“But I have to be truly honest with myself and think about my happiness… I have decided I can’t be in a relationship with you,” says Susan completely tearing Sean’s heart out right there on camera.

Well I won’t lie that that was devastating to watch.

But to say I was surprised would be a lie, they have been leading up to this bloody moment for weeks now.

Thank god for Simon and Alene, the only couple that actually made the last eight weeks worthwhile.

Married at First Sight Australia airs Tuesdays and Wednesdays at 7.30 on Three