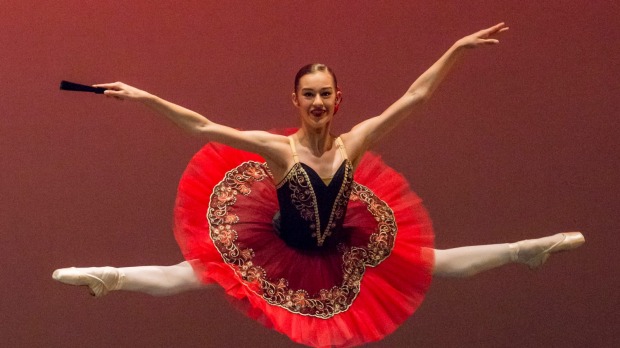 In a world of ballet buns and pirouettes, 13-year-old Macy Cook is officially one of New Zealand’s most promising young dancers.

On Monday night, the Wellington East Girls College student won one of the top awards in the Alana Haines Australasian awards. Being named the top dancer in the 13 to 15-year-old age group, Macy is the first part-time student and Wellingtonian to win since the prestigious event was set up in 1991.

Her win is even more remarkable as she was one of the youngest of the 230 dancers. Macy had the honour of beating dancers up to two years older than her, including some who are dancing full-time.

On the grand St James Theatre stage, the petite, graceful dancer danced her solo piece, Kitri’s Wedding, from the ballet, Don Quixote, several times over Easter weekend, impressing the packed audience and international judges. Making it through to the quarter finals, the semi-finals and finally, the grand finals at Wellington’s St James Theatre on Monday night, the Year 9 student was hoping her name might be called, but was still staggered to win.

New Zealand’s only international dance competition was set up by former Royal New Zealand Ballet dancers Katie and Greg Haines in memory of their 11-year-old daughter, Alana Haines, who was killed in a car accident in 1989. Over Easter, the judges – from Australia, Canada and England – handed out $400,000 worth of scholarships to some of the top ballet schools around the globe. About two-thirds of the 500 dancers entering the awards came from Australia, and six of the nine medals went to Australian dancers.

Katie Haines was captivated by Macy, and delighted that a Wellingtonian has won the event.

“Macy was stunning in her Don Quixote solo both technically and artistically. She has a warm presence that captures the audience’s hearts from the onset,” she says.

“What stands out mostly with Macy is her professional, calm presence on stage. She makes everything look effortless which usually takes many years to achieve and is the ‘art of dance’. That’s only achievable by isolating the effort consciously combined with physical stamina and strength. Unlike gymnastics, dancers must perform amazing moves yet strive to make everything look light and easy which is very difficult.”

Macy didn’t have much more to say, other than that she is thankful for the opportunity, and the support of her dance teachers, and her parents, Jules Cook and Kirsty Strong, who have backed her since she first donned her ballet shoes at age 7.

She simply wanted to improve through the experience of being part of the competition. “I really loved performing on the big stage,” she says.

What does she plan to do for the rest of the holidays? “Hopefully I’ll do some dance classes,” she smiles.

She wins $5000 which she will put towards her dancing, and a four week summer scholarship at the San Francisco Ballet Theatre. And she is most excited about getting automatic entry to the Youth America Grand Prix next year – the creme de la creme of the ballet scene, when she will dance in New York with 1200 of the world’s top ballet dancers, attending workshops, scholarship auditions and master classes. In the past 15 years, the Youth America Grand Prix has handed out $3 million worth of scholarships to the world’s top dance schools, and it is usually only accessible by audition only.

As an indication of how important the Alana Haines awards are, a former winner, the Australian ballet dancer, Harrison Lee, was a guest dancer in the grand finals, and is now a member of one of the most prestigious dance schools in the world, the Royal Ballet School in London.

Saul Newport, a second year classical dancer at the New Zealand School of Dance from Rotorua, was placed third out of the competing dancers aged 16 to 18; the overall supreme winner of that age group was the 16-year-old Australian dancer, Nae Kojima.

Monet Galea-Hewitt, 14, of  Auckland, was in second place, behind Macy. Juliette Gray, 12, of the Southern Ballet and Dance Theatre in Christchurch, was chosen as the audience favourite in the junior category.

Garry Trinder, director of the New Zealand School of Dance, hopes Macy will join their school in future. “This recognition marks Macy as a talent to watch for the future…. as the national dance school, we always want to see the most talented dancers stay here in New Zealand.”