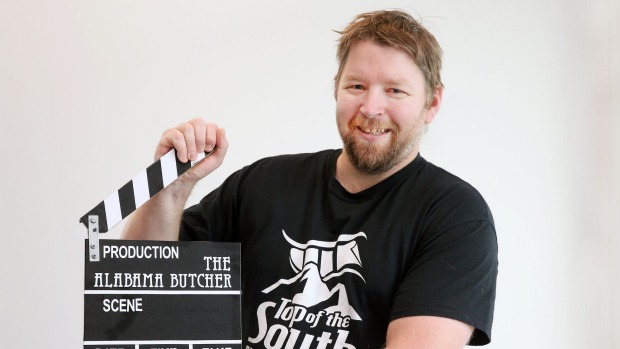 Film-maker and director of the Top of the South Film Festival Phil McKinnon is passionate about his role and wants to encourage others to join in the fun.

Being president of the Top of the South Film Festival means film plays a big role in your life. What do you hope the event offers people?

Most importantly, a fun night out. As festival director, my goal is to bring film-makers together and showcase their films to the Top of the South community and show what talent we have in our region.

The film festival is also about meeting new film-makers, actors, directors; basically anyone who has any interest in movies so we can get them involved and make our group bigger.

If we can do that we will have more resources for people to be able to call on when they are trying to make a movie, but will also give people the opportunity to be involved.

What advice would you give to someone who has never entered the festival before?

The festival is open to anyone who has made a film. The only main condition is that it is filmed locally (in Marlborough, Nelson or Golden Bay).

We have a collection of rules and regulations on the festival’s website which can be found at topofthesouth.org/submit. There you will find everything you need to know about submitting your films. June 30 is the last day for submissions.

Having your film premiere at the festival must be really exciting, but how nerve-wracking is it?

For me personally, yeah it can be. I still get nervous when my film starts, hoping people enjoy it, understand the story I’m telling and most importantly … get scared.

If money wasn’t an option and you could produce any feature-length film you wanted for the festival, what would you do?

I have always wanted to shoot a feature on location in Hawaii.  I would probably make a really good horror film like Paranormal Activity, The Ring or Friday The 13th.

But let’s be honest, if money wasn’t a problem, I would quit my job in a heartbeat and shoot film fulltime.

There seems to be quite a pool of creative talent in Marlborough when it comes to film-making, do you think that is the case?

There are heaps of talented people that I didn’t even know existed here in Marlborough and the film festival has brought these people together.

However, I know there are a whole lot more and they are the people we want to encourage to come to the film festival, introduce themselves, and get involved in our film group.

For anyone out there who would love to be involved but doesn’t know where to start, is there any help available?

Absolutely. We have monthly film meetings – the next one is on April 24 at 7.30pm at Fairweathers. These are a great way to get started and meet fellow film-makers, actors etc.

On Facebook we can be found at facebook.com/groups/Falvation or also visit topofthesouth.org.

Describe the festival in five words.