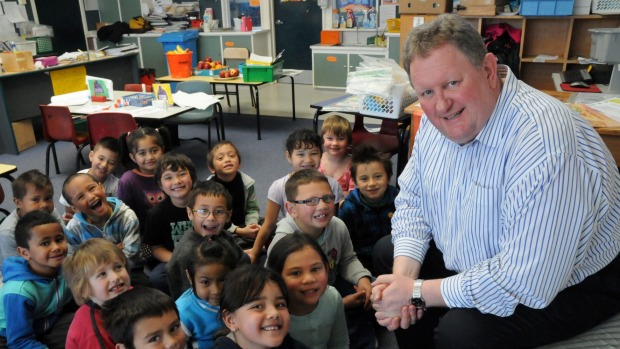 Colin Tarr loves his place at the helm of Porirua’s Titahi Bay North School and he knows how to keep a promise.

When he began his tenure in 2014 one of his first duties was to ask his pupils how he could improve their school grounds.

“They said to me, ‘Please can we have rugby posts so we know which way to run when we’re playing touch’,” he said.

The rugby posts arrived last year. We sat down with Tarr to ask what makes him happy .. .and scared.

What do you do for a job?

I’m been the principal teacher at Titahi Bay North School  since August 2014.

What’s the best part of your job?

Leading the teaching and support staff teams at school to do great things. I love talking with the girls and boys and seeing how they are working, learning, growing and developing as fine, clever and talented young people.

The constant lack of money to do what we’d like to do/provide for our learners and the debilitating/sapping bureaucracy that is applied to, and required, from trustees, principals, teachers in our schools

What would people be surprised to know about you?

I have a love of the theatre. I’ve acted and/or directed many plays and musicals over many years. I’m surprising my wonderful wahine hoa by taking her to Melbourne in May to see the Broadway musical  Aladdin. I suppose it won’t be a surprise when she reads this in the Kapi – Mana News.

How do you relax?

Having a lie in, going to the Lighthouse movie theatre, strolling around the many lovely walkways and trails in our city.

Where can we find you in the weekends?

Reading books and the news at home, in the garden, at Mitre 10 getting bits and pieces for our garden, doing home improvements, sitting out on the deck loving the views of Porirua Harbour, the Bay and Mana Island and thinking what a great place Porirua is to live!

Do you have any special talents?

I can make fantastic pikelets [a secret family recipe handed down through the ages from the Scottish aunts].

If you could invite three people to dinner – living or dead- who would they be?

The chair at the top of a walkway in Papakowhai – giving a panoramic view of this beautiful place we call our home.

If you could have one super power what would it be?

Reprogramming the minds of some young people so they could achieve the great and good things they are capable of instead of getting involved in “bad stuff” that leads them down ‘dead end streets’….

This beautiful planet is the only one we have. We must look after it and care for it. I worry, so much, about the damage we humans are doing to Mother Earth.

Who would play you in the movie about your life?

Sir Anthony Hopkins. He did such a great job of Bert Munro he could play me easy as (and I don’t ride old motorbikes).

What three things would you take if you were going to be stranded on a desert island?

Three flares to fire when there were passing ships or planes. I wouldn’t want to be there very long.

What is your dream holiday location?