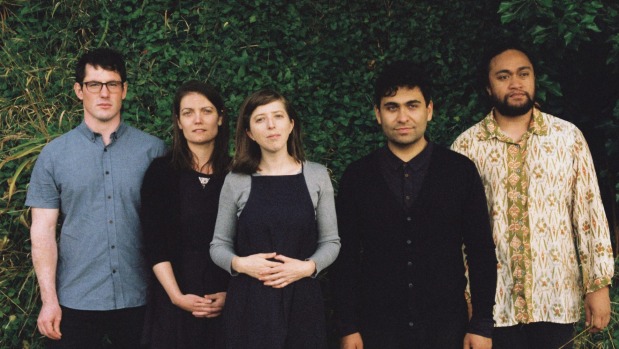 Aren’t they dreamy? Fans of airy indie pop will love French For Rabbits’ The Weight of Melted Snow, a melancholy, lush album propelled by hypnotic vocals and echo-laden piano. It’s no party album. The band’s second was coming together when FFR’s key members Brooke Singer and John Fitzgerald broke off their relationship; because of this it’s dark, full of songs detailing the pain of heartbreak and lost love. Musically it’s all very similar, with swirling soundscapes backed (primarily) by Singer’s gorgeous, full vocals. The standout may just be the gently strummed One and Only, one of the album’s more stripped down, and affecting, numbers.  Towards the end of the album things get a little tiring – there isn’t much musical differentiation, and it’s a fairly gloomy affair – but it’s beautiful nonetheless.

A bright new star has flashed its way across the skies in the Southern Hemisphere.  Levi Patel has previously released two EPs and a collaboration with Suren Unka. And while there was little or no fanfare, As She Passes, one of the tracks off his EP Of Sleep And Time has ebbed it’s way into the consciousness of more than 600,000 online listeners. On his first full length album, Affinity, he does show a genuine affinity for mournful, deeply emotive compositions that are never overblown but capture both the rawness of an emotion and create a greater sense of time and space.  Since Last Letters, in particular,  has a powerful backstory, fleshed out with strings and a stark electronic soundscapes that suggest that unlike many pops songs, the compositions on Affinity will hold their appeal for generations to come.

I’ll admit to being smitten by this record, and it probably helped that I approached it with zero expectations. It just arrived in my letterbox: a slab of black vinyl in an enigmatic green and brown swirly cover. Motte is the Nom de Disque of Lyttelton’s Anita Clark, who began playing violin as a child and now coaxes a whole world of sustain out of her instrument via carefully considered delay pedal manipulations, abetted on many tracks by swooping synthesizer bass from Indira Force. The six tracks here make sly references to traditional violin phrasing from both folk music and gypsy jazz, but on standouts Give It To Me and Strange Dreams, her circling drones and brisk pizzicato clusters more closely recall minimalist modern classical composers such as Steve Reich.  It’s a burnished, hovering, ever-mutating sound, beautiful and anxious by turns. Some songs seem to set off little sonic flares in the darkness, like a mirror slowly turning to catch the sun. Others, such as Bathhouse, are stippled with glitches, overdrive distortion and earth hum, as if recorded through a frayed lead. The fact that Clarke also rolls her glorious thick contralto voice over some pieces, well- that’s almost a bonus.

It’s hard to describe blatantly British duo Sleaford Mods. It’s not quite punk, it’s not quite hip-hop. Perhaps, somewhere in between. Let’s just say the Nottingham pair perform a minimalist brand of quirky post-punk driven by the strong East Midlands accent of vocalist Jason Williamson. Sleaford remind strongly of The Streets for their overt English working class and spoken word feel. There are times when Williamson rants in a manner that transports you straight to a rowdy pub of football fans and hooligans.This is novelty music that’s fun, unusual and a little silly but can be enjoyed for its distinctive British flavour.