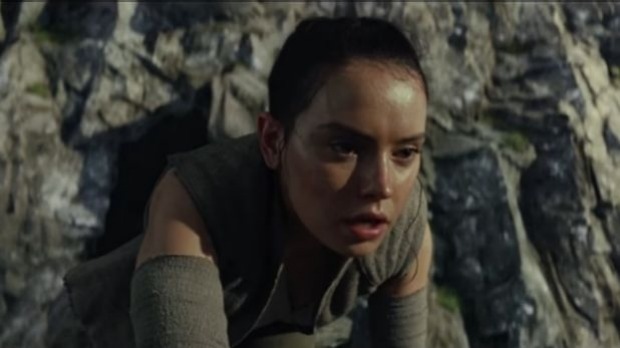 Star Wars fans have been given their first full glimpse at the upcoming film The Last Jedi, with the official trailer launching at the Star Wars Celebration convention in Florida, US.

As you would expect, the trailer offered more questions than answers, but confirmed the film’s main narrative would focus on Luke Skywalker (Mark Hamill) and Rey (Daisy Ridley).

Within the Star Wars story, Skywalker is the farm boy-turned-Jedi knight who has become a recluse, while Rey is an orphaned girl whose natural instinct for “the Force”, the unseen mystical energy field which Jedi’s wield, is perhaps unprecedented in strength.

In the trailer’s opening moments, Skywalker is heard saying: “Breathe, just breathe, now reach out … what do you see?”

READ MORE: * Fisher to appear as Leia in two more Star Wars movies, without CGI * Carrie Fisher remembered as ‘one in a billion’ * Unaltered Star Wars trilogy rumoured to be re-released * Star Wars fans freak out over posters that refer to plural Jedi

Skywalker replies: “It’s so much bigger.”

In one frame, the Ren’s shattered mask appears to be smouldering.

And in another, a figure, seen only from behind, in a resistance control centre, appears to be Princess – now General – Leia Organa, played by the late Carrie Fisher.

The only other major spoken line of dialogue in the trailer is from Skywalker: “I only know one truth: It’s time for the Jedi to end.”

The complex power of the Jedi, and their relationship with the “dark side of the Force”-wielding Sith lords, has been one of the over-arching story elements of the Star Wars films.

The poster shows the faces of Luke Skywalker and Kylo Ren, divided by the blade of a lightsaber wielded by Rey; Kylo Ren was Skywalker’s apprentice “padawan” Jedi until he was seduced by the “dark side” of the Force.

The Last Jedi is  the eighth film in the Star Wars saga, and follows The Force Awakens which was released two years ago.

The earlier films comprise the “original” trilogy – that is, A New Hope, The Empire Strikes Back and Return of the Jedi – and the “prequel” trilogy, The Phantom Menace, Attack of the Clones and Revenge of the Sith.

More recently Lucasfilm produced the first “standalone” Star Wars film, Rogue One, which actually fits into the timeline just prior to the original Star Wars.

A second and third standalone film are planned; the next one will be an origin story for the character Han Solo, played in the original films by Harrison Ford.

The main Star Wars films follow the story of the Skywalker family and the role they play in the shaping of Galactic politics.

The prequels charted Anakin Skywalker’s seduction by the “dark side” of the Force and his role in the creation of the Empire; the original trilogy followed his children, Luke, and Princess Leia Organa, as members of the rebel alliance against the Empire.

The Last Jedi will be released on December 15.