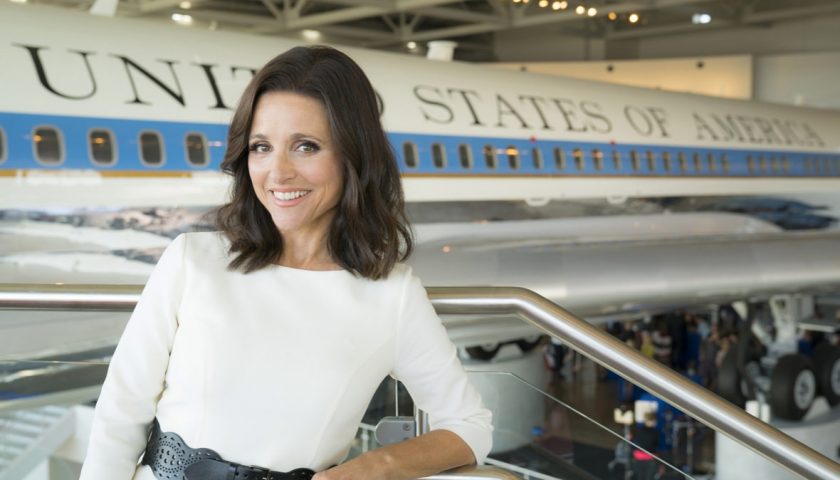 The new season is a portrait of a defeated female politician in exile, and it has more pathos than punchlines.

Accepting the award for Best Actress at this year’s Emmy awards, Julia Louis-Dreyfus cracked, “Our show started out as political satire, but it now feels more like a sobering documentary.” Louis-Dreyfus was referring, of course, to Donald Trump, whose successful bid for the presidency and its attendant shenanigans seemed like a plotline straight out of HBO’s Veep, the show on which she stars as the self-defeating politician Selina Meyer. Except that fiction, unlike reality, usually has an obligation to seem plausible.

Over its five-year run—the sixth season begins Sunday night—Veep has earned a reputation as the most politically accurate show on television, among people in a position to know: politicians and their staffers. It presents Washington as a bastion of ass-covering, crisis management, dysfunctional dynamics, self-motivated incompetence, shoddy image management, and diarrhea-grade crap-mouthed cursing. The personalities and antics of the Trump administration—Steve Bannon and his schlump-Nazi wardrobe, Stephen Miller and his shiny wunderkind ethno-nationalism, Kellyanne Conway and her junk-bond positivity, the son-in-law given a portfolio to fix the world in his vacation shades, golden showers, imaginary crowd size, administrative priorities torpedoed by incompetence, neglect, recalcitrance, and, of course, the gigantic, fluffy-headed baby man at the center of it all—are all so Veep-ish they could scarcely be improved upon by Veep. What’s a comedy to do when reality outpaces it?

Due to the vagaries of electoral politics, the new season of Veep retreats from this question instead of grappling with it. The writers of Veep, like just about everyone else, expected Hillary Clinton to be president. Veep left off with President Meyer losing the election in a close vote in Congress to another woman. As the new season begins, Selina has spent her year in the woods (and maybe the sanitarium), and is just returning to public life after a loss she describes, with a catch in her throat, as “devastating.” If Clinton had won, this setup would have pugnacious elegance. Veep wanted to be in conversation with a Clinton presidency, but not directly. Selina would have served as a kind of alt-Hillary, a ball of resentment, confusion, and genuine grievance, relegated to the outskirts of politics, running a corrupt foundation with her walking erection of an ex-husband, turning Veep into a hilariously deflating counterfactual about the Clinton administration.

But even when Veep actively tries to avoid imitating life, life goes and imitates it. Thus, a jilted Selina has a whole lot more in common with a jilted Hillary Clinton than the show had supposed she would. If there’s no such thing as punching down when it comes to the Clintons, Veep is not punching directly toward the sky, as it might have imagined it would be. There is more pathos to Selina’s jittery insecurity than Veep intended. Even one who enjoys a good Hillary ding might concede that there are bigger fish to slam over the head with a cast iron pan at this particular moment than a defeated HRC.

Whether or not female rage, pain, and misdirected ambition for its own sake are more or less funny in a world that has so recently validated their causes, by focusing on Clinton, Veep keeps from focusing on Trump. Veep is still Veep, which is to say outrageous, brash, and very funny in promulgating its convincing vision of democracy as running on nothing but inertia. But there is no new Trump-like figure, or even a particularly big shake-up in its fictional D.C. Instead, Veep’s characters are further removed from the center of power than they have ever been. But for devoted body man Gary (Tony Hale), Selina’s staff has scattered. Amy (Anna Chlumsky) is rage-running her fiancés political campaign in Nevada; Dan (Reid Scott) is hosting CBS’s morning news show; Mike (Matt Walsh) is parenting; Ben (Kevin Dunn) is being casually racist as a new employee for Uber; and Kent (Gary Cole) is advising Jonah (the perfectly detestable Timothy Simons), still a raging dingus, now also a congressman. They come back together and swing apart as Selina tries to write her memoir, fund her library, or observe a presidential election in Georgia—the country, not the state.

Veep has always kept its distance from certain political specifics. Parties aren’t named, politicians since Reagan aren’t mentioned, and there are no ideologues, phony or otherwise. No one on Veep believes in anything besides covering her own ass. The absence of intense partisan rancor has always made Veep surprisingly escapist: Yes, it mercilessly portrays an abased and dysfunctional system that will never fix itself, but at least not in the hopelessly familiar red-blue terms of cable news. Yet the half-baked motivations of the Trump administration, and its selectively populist, free-market, interventionist, isolationist hodge podge of “ideas,” to say nothing of all the ambitious clowns jockeying for position inside the administration, seem sufficiently chaotic for Veep to take on without getting too close to America’s partisan third rail. Outfunnying a Trump administration on absurdist terms might be impossible, but it’s a letdown that Veep hasn’t, at least through three episodes, given it a real try. Even if a fake Trump could never best a real Trump in terms of ludicrousness, there’s only one its safe to merely laugh at.