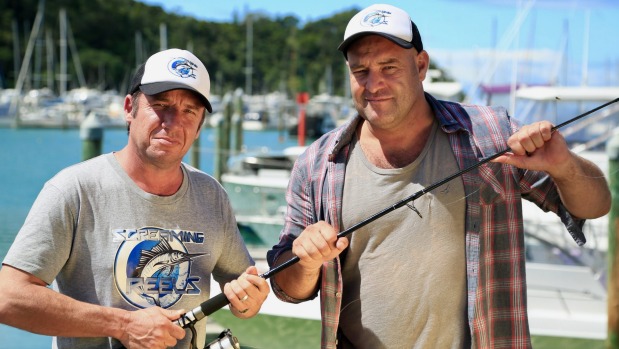 You don’t have to like fishing to tune into Screaming Reels. In fact, it might be better if you’re not a fan of the sport.

If you are looking for tips on how to land the big one, then this is probably not the show for you, warns Leigh Hart, aka That Guy.

“Three episodes in, and no one’s drowned yet and we haven’t caught a fish up to this point,” he says, admitting he is something of a fair-weather fisherman.

“I have caught fish in the past but I wouldn’t get out there at five in the morning to do so.”

Hart says fans of his 2002 series Moon TV will know what to expect.

“We start with a hiss and roar, marlin flying all over the place. We hark back to the old days, learning from great uncles in our past.

“It’s very tongue in cheek and we may have the odd guest out there (Ultimate Fishing’s Matt Watson is a possibility) in the future with us,” he says.

“But it’s really just two guys out there talking a lot of rubbish on a boat. In many ways, it’s more accurate than any other fishing show because most of the time when you are fishing you do very little other than talk rubbish.”

Over six episodes, Screaming Reels focuses on Hart and his mate Jason Hoyte, a couple of rather bemused charter captains and the odd guest.

Screaming Reels is unscripted but Hart doesn’t believe that will pose any problems.

“Jase and I are pretty used to that. I am about to do radio with him now and we haven’t a clue what the show is going to be about,” he says, adding the experience of being confined together in the small space of a boat provides plenty of material for the pair.

“We talk about relationships out there. One scenario I put to Jase is The Graduate scenario.

“We go, ‘If one of your mother’s friends made a pass at you, do you think you’d go along with it?’

“That goes on for a while before I actually reveal I’m talking about right now and that one of his mother’s friends would be 87. He thinks he’s in his 20s and she would be in her 40s.”

Hart readily acknowledges that the show might upset some serious fishermen – but not too many.

“I think fishermen themselves will probably enjoy this show,” Hart says, “because they will probably get some of the gags more than others.”