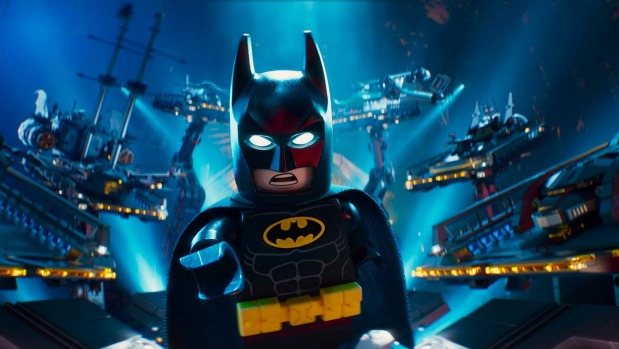 The tattoos proclaim Chris McKay as an utter film nerd of the most likeable sort, even before he opens his mouth to speak.

Up and down his forearms and hands McKay has inked homages to Alfred Hitchcock, Captain America, The Black Panther, Catwoman, DC comics (there’s probably a Marvel logo on him somewhere too, but I didn’t ask to see it on a first date), the schlock-cult 1984 classic Children of the Corn, and another that I peered at hard, but just couldn’t identify.

McKay is six hours into a long day of interviews, sitting alongside Lego Batman producer Dan Lin, facing a loose panel of four writers firing questions at them for a rigidly enforced twenty minutes. Somewhere else in a Los Angeles hotel, being rotated through the rooms, are tag teams of Zach Galifianakis and Will Arnett, and Michael Cera and Rosario Dawson.

It’s an odd day. As a writer you’re torn between not asking the exact same bloody question that every one else has and still getting the material you need. Which pretty much means having to ask that question. I grit my teeth and take one for the team: “Were you surprised at how popular the Batman character was in the (original 2014) Lego Movie?”

McKay, to his endless credit, gives a wonderful impersonation of someone hearing this question for the very first time and not the hundredth, and lights up with an enthusiasm and focus that’s impossible not to be charmed by.

“Oh man. As soon as we heard Will (Arnett, who plays Batman in The Lego Movie and The Lego Batman Movie), we knew he was going to be a complete standout,” he declares.

“That guy, I mean, his ability to play up the complete a…… qualities of the Batman, and still make him kind of sympathetic and lovable…I don’t know who else but Arnett who could have nailed that. I mean, you’ve seen him in Arrested Development and that quality is already there. Or what he does in [animated, and completely brilliant US series] Bojack Horseman … yeah, so, we had confidence. But, you know, it was never a foregone conclusion this movie would happen. We had planned a general, y’know Lego Movie 2. But the Bat just muscled his way to head of the queue. The audience pretty much demanded it.”

Arnett’s long standing association with Zach Galifianakis (The Joker) secured his involvement, but Michael Cera (Robin) was a harder sell. “Michael really had his doubts,” says McKay. “He’s not one to bury himself in some big impersonal blockbuster. And he had never done animation before. So I think he was kind of distrustful of the medium. But Will and Michael had history, so we got him onboard. And, like the others, it’s impossible now to imagine anyone else in the role.” It is too. The Leg Batman Movie might not have the unexpected sugar-rush of brilliance of the first film. But it is a terrific stand-alone entry in what promises to be the world’s silliest and funniest franchise. There’s a Lego Ninja movie out before 2017 is over, and The Lego Movie sequel a year or so after that. McKay and Dan Lin make a formidable double act. Lin is an industry veteran, despite looking no more than about 30. He has work on Scorsese’s The Departed and The Aviator on his CV, as well as a small Kiwi connection via Roland Emmerich’s hilarious 10,000 BC, which was partly filmed around Wanaka and Cardrona in 2008. They teamed up after meeting during the making of The Lego Movie in 2014. McKay was a director of animation on that film. As co-directors Phil Lord and Christopher Miller moved onto other projects, it was McKay who oversaw the film’s final months in the editing and animation suites. That Lin would hand McKay the keys to a potential multi-million dollar blockbuster as his feature directing debut seems like a no-brainer once you hear them talk about the process.

“From the very beginning we wanted to make this film a gift to the kids, y’know,” says Miller. “Even though it’s our riff on these very adult characters, the film is really about family, about learning who your family is and finding them. We took these ultimate outsider figures (in Batman and The Joker) and we set about showing them up as these vulnerable, sensitive figures who just need some friendship and acceptance. But we also tried to make it enough fun to watch that no one would ever notice what we were really up to.” Lin adds: “The film is about characters learning to open their eyes and look around and learn to trust again. We figured that’s the bottom line with these characters. I know it sounds odd to talk like this about comic book characters made out of Lego blocks, but that truly is what we were aiming for.” I ask whether they think this story of redemption and acceptance that The Lego Batman Movie peddles could have been in Christopher Nolan’s mind as an end-game when he launched his darkened and toughened version of Batman in his trilogy of films? “I guess, because of Heath Ledger’s death we might never really know the answer to that [Ledger played the Joker, brilliantly, in the 2008’s The Dark Knight. He died of an accidental overdose of prescription drugs before the film was released],” says McKay. “But I think there’s no way that Chris Nolan would have been planning to leave the Joker out of the next film.

“And when you look at the best of the comic book story arcs, especially [1988 comic] The Killing Joke … yeah, I think it’s very possible that we are treading ground that those films might have gone to. We’re just doing it with plastic blocks…and hugs. We’ve probably got a lot more hugs.” The room erupts with laughter when McKay says: “Our pitch to the studio was ‘it’s Jerry Maguire directed by Michael Mann with jokes’.” Lin laughs too, and then interjects: “He’s not joking. That truly was the pitch.” Which gets us into a whole new conversation about how making animated parody films grant a creative freedom that would never happen with a live action movie. “We couldn’t do this with live actors,” reckons Lin. “The audience don’t want to see these characters sent up by other people. But when you come at it with a box of plastic bricks…we send it up but everyone knows we’re doing it with real affection and respect.”  McKay. “We get to reference every screen Batman ever, we talk about Adam West’s 1966 Batman a lot. His DNA is totally in our Bat. So is (Michael) Keaton’s and Christian Bale’s.”

McKay doesn’t mention the Val Kilmer and George Clooney versions of Batman, but he does note: “I think it’s been proven that if you try to joke around with these characters or send them up at all in the live action films…the audience don’t want that. These are incredibly serious, dark, classical characters. You can trace them straight back to classical myth and people do. So you undermine them at your peril. But, with the Lego … you know, we can tap into our own classical tradition. We can be the jesters, the court clowns who are allowed to speak truth to power in a way that no one else can.” Our time is up. With a couple more gags and thank yous, Lin and McKay get up to leave. Just before he’s out the door I ask McKay what the last tattoo – the one I couldn’t identify – represents. “Oh man,’ he says, as though he’s disappointed in me for not recognising it, ‘it’s Halloween 3. That’s the best one…”