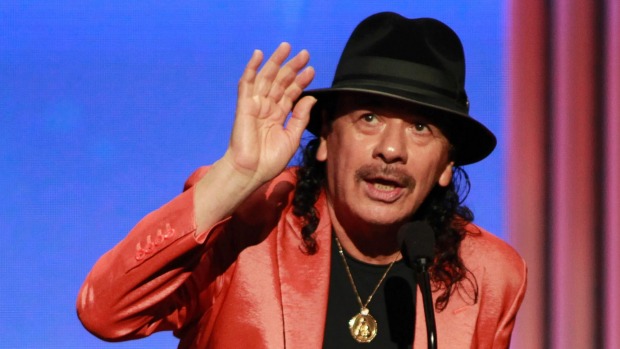 He had sold more than 100 million albums, won 10 Grammy awards, performed with Prince and has a musical residency in Las Vegas.

But as Carlos Santana prepares to mark his 70th birthday, the legendary musician has no intention of slowing down, insisting he’s ready to get into “divine mischief”, avoid becoming normal and continue making music that reaches all ages – potentially with Adele and Beyonce.

“My body may be 70, but I’m still a thirsty-for-adventure seven-year-old who wants to get into divine mischief,” the legendary guitarist says in his only New Zealand interview ahead of April 18 show at Auckland’s Vector Arena.

“There is such a thing as divine mischief and delicious madness. Normal people are boring and predictable and I run away from normalness as much as possible because it’s more fun being crazy and believing you can do the impossible.”

“It’s more fun believing you can be in the Rock & Roll Hall of Fame in ’98, and then do [song] Supernatural, which was like winning Wimbledon with all the awards coming in all over again. We’re almost ready to get into the studio and infiltrate radio again. All it takes is a song that people all over the world, from ages seven to 77, can identify with – music shouldn’t just [target] seven to 17-year-olds.”

It’s only natural that the Mexican-born chart-topper plans to continue making music well into his seventies and beyond, having mastered violin and guitar by the age of eight with the help of his mariachi musician father, Jose. Relocating to the US, he found success with his band, Santana, thanks to their pioneering fusion of rock and Latin American music in the late 1960s, then experienced a resurgence thanks to his 1999 record Supernatural, which featured the smash hit Smooth, co-written and sung by Matchbox Twenty frontman Rob Thomas.

Having spent more than half his life making music, the father-of-three, who is married to drummer Cindy Blackman, shuns the countless technological advances that have rained on the industry throughout his career.

“I don’t lip synch. I don’t use machines and the only time I use a computer is to tell me what’s happening with the weather … but really, if I look at the sky I can read it. I’m not dependent on [technology] to do things for me. A lot of people are not complete musicians because they can’t even play guitar or drums –  they just use machines, but it doesn’t feel the same.

“I grew up admiring and learning from people like Billie Holidayand Jimi Hendrix, but nowadays it’s all become so mechanical and computerised that it takes three things out of it: emotion, feeling and passion. Those are the first things you should put into the music!”

Working with some of the biggest names in entertainment, Santana lists late legends Prince and Miles Davis as his standout collaborators, but has fond memories of all of his musical partners, many of whom he remains in touch with – like Rob Thomas, still sending Thomas flowers on his birthday.

However, his hopes for future partnerships are pinned on female musicians and despite recently causing controversy by describing Beyonce as “not a singer, singer” compared to Adele (later apologising and saying his remarks were taken out of context), she remains top of Santana’s collaboration wish list.

“I love sharing music with women, so I look forward to doing something with Adele and of course Beyonce. Anyone that has a willingness to share their hearts in a room with me is always welcome.”

Of course, there’s one woman in music who he is most enthusiastic about – daughter Stella, who released her debut album, Selfish, last year.

“I’m really proud of her, like my father is proud of me and his father was proud of him, because for us it’s a way of life,” he says. “It’s not a profession. And, I’m really proud because she’s living in New York and it takes a lot of courage to live in a big city like that by yourself and spread your wings! She is who I am in her DNA, but I like that she’s not leaning on me. She’s like an eagle who flies out of the nest and finds her own sky and own space.”

With much of his own time spent in Las Vegas, where his band have a residency show, An Intimate Evening With Santana, at Mandalay Bay’s House of Blues, the rocker says he’s looking forward to hitting the road and thrilled to be returning Down Under. He has fond memories of his last trip, in 2013, and invites Kiwis to turn him onto new local bands and music “with universal tones”, which he can “learn and share with the rest of the world.”

“It’s such a pristine country,” he says. “I love to just walk around, meet people, connect with Maori and all their principals. I always remember when Bob Marley was there and drew thousands and the Maori people came and gave him the traditional greeting. I’ve also received one and I’m honoured and feel so much respect that they would have a ceremony like that for me.”

So, what can fans expect from Santana’s Transmogrify show? The concert, featuring special guests the Doobie Brothers, comes a year after the release of Santana IV, featuring the band’s original lineup reunited for the first time in 45 years. “A whole lot of chills, tears, dancing, laughing, rejoicing and celebrating your own divinity,” he says. “But more than anything, energy and the power of believing you can do the impossible.”