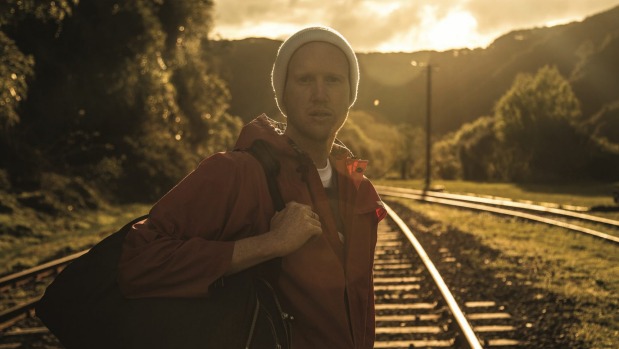 Lake South of the now defunct Urban Tramper and the very much alice Wellington Sea Shanty Society has left port in search of new adventures.

Well not literally, but on Tuesday, after a short tour of New Zealand to promote the release of his debut solo album, If You’re Born On An Island The Ocean Heals You, flew to France with his partner, courtesy of funding from the New Zealand France Friendship Fund.

“I am going to France to record a new sea shanty album with a few friends,” he says before leaving.

When in France, he will be joined by fellow mariner Vorn and they will team up with “post chant marin” group Croche Dedans to record a sea shanty album.  And then it’s a short holiday in Europe, before South and his partner head to Toronto, Canada, to live.

‘In the past, I’ve gone overseas because I felt I needed to get away,” says the Silver Scroll nominee and 2014 Critics Choice finalist. “I am moving away with a little pang of regret.  I still love New Zealand but the time is right.  My partner and I applied for work visas in Canada and got them.”

Of course, Toronto is quite some way from the nearest Ocean, but south is going to be surrounded by the great lakes.

So it begs the question, has being born on an island surrounded by the ocean healed him?

“I just caught the train from Petone to Wellington,” he says.  “I’d been visiting one of my brothers who lives in the Hutt Valley.  The train into the city goes right along Wellington Harbour.  It is such a beautiful ride.  Every time I am around water, I feel a lot more grounded and at home.  It always reminds me of why it is so wonderful living in New Zealand, because it gives you that strong sense of place.”

Of all of the songs on If You’re Born On An Island The Ocean Heals You, the one that most readily encompasses South’s wandering spirit is Binge Drinking & D H Lawrence, which features Nadia ReId..

“I was reading Lawrence’s Lady Chatterley’s Lover and, yes, I had been drinking a lot more than I usually do.  It is a song about moving from Wellington to  Auckland,” South says.  “I got a small flat near the Balmoral shops.  It was all I could afford and, for the first few months, being in a city where I didn’t have that many friends got me thinking about the importance of family.

“When you grow up, you sort of take it for granted because your are cocooned within it. It’s only when you move away from home that you realise how much your family means to you. I was at a party chatting to a woman who was talking about having kids.  In my previous relationship, my girlfriend had a young child, who I had developed a deep bond with and then kind of left that behind me when I moved to Auckland.  The conversation I had with this stranger at a party bought up a lot of strong emotions about how important my family was to me.”

When South moved to Auckland in 2014, he released the first single, Good Kean Man, and then went off the musical radar for a year.

“I had a bit of a break from music after that,” South says. “I got disillusioned with music and what my place was in it.  I had lost quite a lot of money in various projects and, maybe because of the age I was at, thought it was time to get a proper job.  I worked for Ateed for about eight months and wrote songs sporadically.  I was struggling to write a body of work.  When a song came, I went with it.  It wasn’t until last year, when I went to a bach in Whangaroa Bay [in Northland] that I found my inspiration again and finished off the album.”