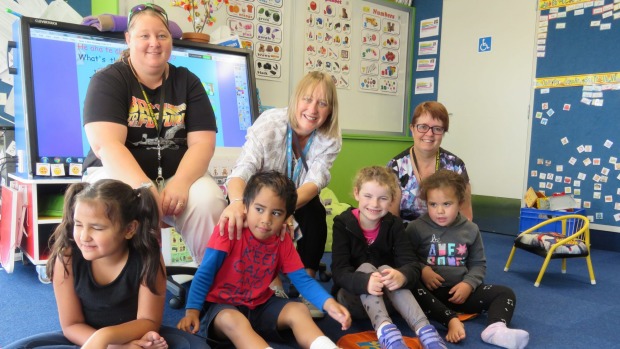 After five years of securing funding, planning and construction, one of Hawke’s Bay’s most unique schools has opened its refurbished doors.

It has satellite classes at Hastings Central School, Raureka School, Heretaunga Intermediate and Flaxmere College, where students can be taught in specialised classes while still being part of a mainstream school.

These are all operated from its base school, which has four classrooms on a site next to Hastings Central School.

It first opened in November 1975 and just over 40 years later the buildings were in need of a spruce up.

Principal Sarah Roil said it has taken five years to arrange funding and create a unique design which would suit their students, then construct the new buildings in a staged process while the school remained on site.

“The kids have been amazing,” she said. “They were interested in what the builders were doing, and the diggers and trucks, it ended up being a learning opportunity for them.”

At the end of last year the school moved into the new building, which has four classrooms, a teaching kitchen and multipurpose space all on the ground floor.

These open onto a play area with a larger veranda to allow the classrooms to flow outside.

The school itself takes place on the bottom floor with offices on the second floor.

On April 7 the new site was officially opened with a powhiri and hangi with nearly  400 people there to celebrate.

Roil said the new purpose built school was exciting to be in.

“It’s what our kids deserve,” she said.

“They deserve to be in a modern learning environment that meets their learning needs, and that’s what we have got.”

Around 20 children are taught at the base school with 100 overall between this site and the satellite classes.

Roil said the school curriculum was based on the New Zealand Curriculum but provided more individualised learning to ensure each student’s needs were met and provided with a pathway through the school.