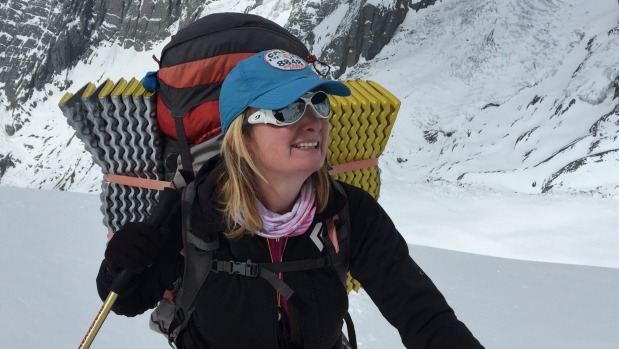 When Christine Jensen Burke fell screaming into a gorse bush in the Clyde hills as a child, she assumed she had lost her footing.

Years later, she learned the truth about her first “mountain” experience.

“For some reason, my brothers and I were out climbing in the dark, and I can recall being right behind one brother and then falling and screaming when I landed in gorse bushes.

“When I recounted that story more recently to family, one of those brothers started laughing and confessed that he recalls pushing me, maybe because I was too close on his heels.

“I had always wondered how I lost my footing,” Jensen Burke said.

Jensen Burke is now steadily knocking off the world’s 14 peaks over 8000m.

She’s done nine, including Mt Everest, and by the time she is in Wanaka for the New Zealand Mountain Film Festival, she should have done 10.

This month she began a three month expedition to Kanchenjunga (8,586m) in Nepal.

She will speak about that trip and the work she does to support the health, welfare and education of Nepalese women and girls.

Jensen Burke,48, helps funds her charity work with Nepalese women and girls with the proceeds of her book, The Power in Girls, public speaking and other activities.

She moved to Sydney in the 1990s, looking for warmer weather. When she began mountaineering seriously as an adult she returned home often to climb with a friend at Aoraki-Mt Cook.

People had asked her to write about her climbing experiences but she felt her first responsibility was to send positive messages to women and girls, that they could achieve what they set out to do, she said.

“The driver for The Power In Girls was from an experience I had observing a young girl I know well and my observations with small children, girls in particular, as to how in the blink of an eye their spirits could be crushed.

“I really didn’t like the kind of thinking that we somehow had to get our power back. It’s always there. We just have to tap into it,” she said.

The New Zealand Mountain Film and Book festivals are in Wanaka from June 30 to July 9.