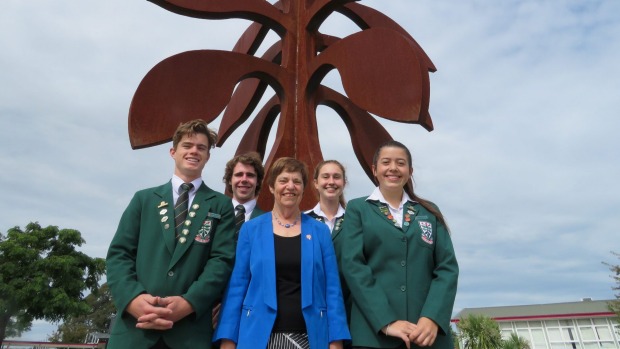 Two years teaching in Hastings was meant to be June Clark’s big OE.

The proud South Islander planned to do a short stint at Karamu High School before returning to “The Mainland”, but at the end of this term she will retire after 41 years at the school.

The deputy principal and biology teacher began her career at Taieri High School in Mosgiel, after studying at Canterbury University .

“When I first got in the classroom I really wondered if I was in the right place,” she said.

“It was an interesting learning curve because those were the days when they gave you the roughest possible classes.”

But this didn’t shake her passion for teaching, which still remains strong years later.

“I’m still in the game because of the kids, I loved the kids and still do.”

When Clark arrived at Karamu in 1976 the school had a role of 1300 students, as Havelock North High School and Flaxmere College were still being established.

It was “a whole lot of prefabs”, completely different to the current redeveloped modern site.

Aside from technology and new buildings, she said the core of her role as a teacher remained the same.

Her highlights after years in the classroom were seeing students grow during their time at school, then go on to become positive members of the community.

“It’s seeing kids go off and make a life for themselves … we are only the beginning of their pathway.”

Principal Michael Leitch said in her role as deputy principal Clark had overseen the area of curriculum and curriculum development.

She had an ability to mentor and support students to develop their career pathways across the spectrum.

“She has an amazing heart for students, they are always at the forefront of her thinking,” he said.

In her retirement Clark said she would be doing a range of activities from golf to volunteering to keep active.

“I’m not going home to sit in my armchair that’s for sure.

“But I’ve seen the first generation, I’ve seen a number of the second generation … I haven’t quite got to the third generation and I think it’s time I got out before I do,” she said.