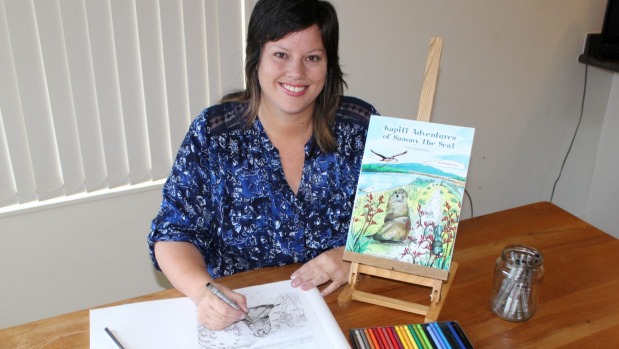 A Kapiti artist specialising in painting native New Zealand birds has illustrated a children’s book, charting a seal’s experiences in the region.

The book follows the New Zealand fur seal as he leaves his Kapiti Island home and explores the Waikanae Estuary area, taking in the different flora and fauna.

Raumati-based Owens has painted many native birds since moving to Kapiti five years ago. Her paintings were displayed in the past four Kapiti Arts Trails.

She attended a bird tour of the estuary, run by Peryer, who remembered her and made contact when the story needed to be illustrated.

The pair hoped the book would be the first of five in a series.

Owens said she enjoyed the challenge of interpreting Peryer’s words and illustrating them.

“It was another opportunity for me to explore this creative skill set.

“It was lovely because I was familiar with the subject matter, and the fact it was a Kapiti-based story was awesome for me.”

She researched birds like the banded dotterel and oystercatcher, as well as other animals like hares, stoats and eels mentioned in the book.

Some of the scenes were adapted from photos taken at the estuary.

It took Owens about a year to illustrate the book part-time.

As the sketches emerged, she said her daughter Ava, 7, began to take a liking to them.

“She was colouring them in and she wanted to write her own stories.”

Owens read the book to Ava’s class at Raumati Beach School, and at the adjacent Raumati Beach Kindergarten, where she has painted a marine mural in the past.

“it was so wonderful to see them so engaged and enjoying learning more about Kapiti’s wildlife,” she said.

Owens is working on her 10-painting exhibition for the New Zealand Art Show in Wellington over Queen’s Birthday Weekend. She will start illustrating the second book of the series later in the year.

Kapiti Adventures of Sammy the Seal will be launched at Coastlands Garden Court on Sunday, April 30, from 1pm-2.30pm.

To order a copy, email mick.moira.peryer@paradise.net.nz