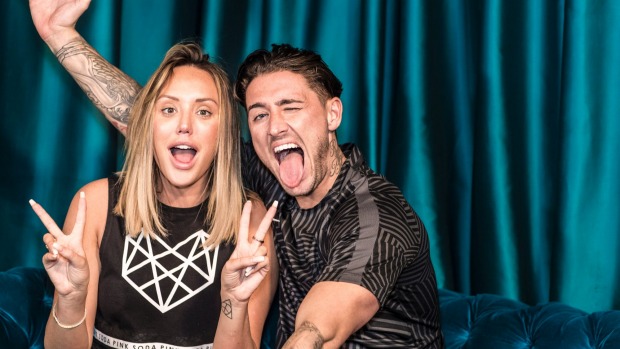 Imagine letting someone choose a tattoo for you but the catch is you can’t see it until it is inked on you for life.

That is the premise of the new MTV show, Just Tattoo of Us, starring Charlotte Crosby and Stephen Bear.

The british reality stars are in New Zealand to promote their show that gives people surprise tattoos.

Tell me about The Tattoo of Us?

Charlotte: It’s a show about a pair of people, it could brother and sister, friends, mother and daughter. It just has to be two people that have a relationship of some form. What they do is they design tattoos for each other, our tattoo artists put them on the skin and they don’t get to see them until they are actually all finished.

What made you decide to do this show?

Charlotte: It was just a really exciting opportunity to be asked to be presenters.

Bear: It is different from normal TV we used to do. Obviously reality television is one thing but presenting a big show is completely different. To have a skill like presenting you get seen in a different light. Most people would die to be a presenter so we are lucky.

Charlotte: The experience to be known as presenters other than just the girl off Geordie Shore and the guy off Ex on the Beach is a lot better.

Were you guys together before the show?

Bear: No we hardly spoke before the show really. When we got on the show we started talking to each other, well we had to because we were presenting with each other.

She’d play it cool. She would ask me a question, I would answer the question then she would walk away from me I think because she was trying to flirt or something.

Charlotte: We got on straight away. I was quite flirty from the beginning.

What’s it like being on TV and getting to do a show with your partner?

Bear: It’s the best, I would recommend it anyone. Working with your girlfriend, it is the best!

Charlotte: It’s good, it’s really good. It’s nice because for me I had a few boyfriends that weren’t really in this line of work and that is what really made it difficult so meeting Stephen literally ticks every single box.

What is the best part of the show?

Bear: Everyday is a new day, it is not the same thing and the time flies when we are working.

Charlotte: We did long days but it was always dead exciting getting to see the reveal because we don’t always know what the tattoos are either. And the stories and things we see are hilarious. Bear: It is always like we aren’t even working.

What is the worst part?

Charlotte: You do get tired because it is long days. One of the longest was almost 22 hours but that was one of the first days and it was all dead new and no one really knew what they were doing but it’s just quite tiring.

What is the craziest thing that has happened on the show?

Bear: Well we can’t give too much away but something pretty big happens with one of the couples! You’ll have to watch to find out.

What would be the absolute worst thing you could ever get tattooed on you?

Bear: An ex girlfriend or boyfriend I think… a picture of them. Imagine going home and speaking to your girlfriend and she says who’s that! You’ll be like it’s my ex-girlfriend.

What is a tattoo you have always wanted but never got?

Charlotte: I really like the elephant heads with all the jewels on and stuff.

Bear: There’s nothing. If I’ve ever wanted it, I have got it but I want to get a falcon. I’ve always wanted a big falcon on my forehead but I’ve never had time to do it [laughs].

Are you going to get any tattoos while you are in New Zealand?

Charlotte: I have gotten every single one of my tattoos apart from one from Bondi Ink (in Sydney) but I don’t think I will go there this time. I have enough tattoos now. Bear: With me you just never know, it is always a big surprise so maybe!

Best tattoo you have ever seen?

Bear: A funny one I have seen was a man got an elephant ‘downstairs’.

Charlotte: I saw that one, that’s my favourite too.

Worst tattoo you have ever seen?

Charlotte: Probably that one as well, no one really wants to see that do they.

Bear: The one on Charlotte’s arm. It’s terrible have you seen it? It’s her ex-boyfriend.

Charlotte: It’s just an initial, it could mean mum!

Have you been to NZ before?

What do you like best about the country? Charlotte: I really like going to the clubs. Everyone is really wild in New Zealand, wilder than people in Australia. I would say the wildest place I have ever been is New Zealand.

Is there anything about New Zealand you don’t like?

Charlotte: No! Nothing! Bear: Everything is perfect!

What is your party trick?

Bear: I can down a WKD bottle (a vodka RTD) in under two seconds, put a straw in it and i’ll down it.

Charlotte: I don’t think i’ve got one… doing the worm?

If you were on an island and could only bring three things, what would you bring?

Bear: But you’d need to plug it in! Unless you have a speaker with solar power.

Charlotte: I’d have a solar panel to create all my electricity because if it is a desert island there is going to be a lot created.

Bear: I’d bring a doctor with me actually, a fully qualified doctor. That would be handy wouldn’t it! And Mad Rob my brother!

What has been your favourite show to work on? Charlotte: I had a lot of good memories on Geordie Shore. Geordie Shore was my longest show. It was five years but i’d like to say Just Tattoo of Us because it is a new experience and I have really, really enjoyed it and I hope it goes on as long as Geordie Shore.

Bear: It would be Just Tattoo of Us because that is where I met Charlotte