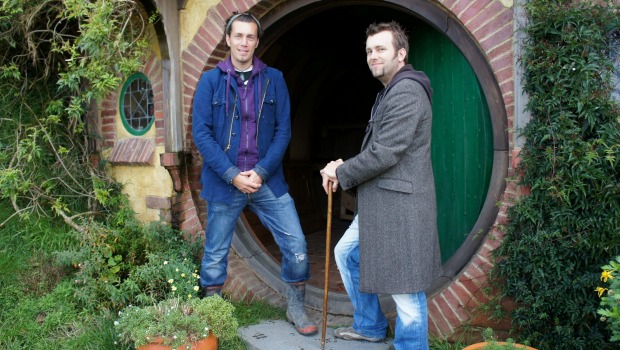 The great-grandson of JRR Tolkien is in Middle Earth on a very special adventure.

Royd Tolkien is touring New Zealand discovering what makes up a truly spectacular bucket list – but it’s not his list.

Tolkien’s bucket list was left for him by his younger brother Mike, who died two years ago, aged 39, from motor-neuron disease (MND), which causes progressive paralysis of all the body’s muscles, including those required to walk, talk and, eventually, breathe.

After Mike’s diagnosis with MND in 2012, the brothers planned to visit New Zealand so Mike could feast on the adrenaline sports he loved, one last time.

But MND moves fast and there was no time to do so. Mike set Royd a challenge of completing his bucket list for him.

Royd says he has been in New Zealand about 12 weeks and only has three items from the 50-long list left to tick off.

He isn’t aware of what is on the list until he is about to do each item, he says.

His genuine reactions – whether they be fear, embarrassment, wonder or sadness – have been filmed to create a documentary titled There’s a Hole in my Bucket.

He has bungy jumped, auditioned for a comedy show, waxed his entire body, been tattooed and dressed as Gandalf on his Air New Zealand flight from Heathrow.

Royd says his brother was always the adventurous one: Mike enjoyed paintballing, wakeboarding and skateboarding. Royd was happy to take life at a more leisurely pace.

“Everything I’ve done is an honest reaction to what’s in front of me … This journey has been pushing me well outside of my comfort zone with all the adventure stuff,” he says.

“It’s about making me realise it makes you feel alive to do something you’re not used to doing.”

He says even more than the list, he has enjoyed travelling the country and meeting so many people.

“All the people who I’ve met along the way, they’ve been incredibly kind and generous.”

He has been collecting items along the way which will be auctioned off at an event at Wellington’s Roxy Cinema on Wednesday, where he will speak about his journey from his brother’s diagnosis to today.

“It’s a message of inspiration,” he says. “It took something really shit to happen to my brother for me to realise how important friends and family are …

“Understand how important family and friends are, and if you’re able to, go out and grab life by the balls. Despite having this condition he still craved life.”

All proceeds from the auction, which include a Weta Workshop orc full head prosthetic, statues signed by Sir Richard Taylor and Sir Peter Jackson, artworks and more, will go to MND New Zealand.

Royd’s journey is helping to raise awareness to a disease considered rare by most people, she says.

“People are listening to him and his experiences … What Royd is doing is he’s given visibility to people who have to spend a lot of time at home. It’s hard to get out and about so I think he’s giving them a voice and visibility on behalf of his brother.”

* An Evening With Royd Tolkien takes place at the Roxy Cinema, Miramar; 7pm-10pm on Wednesday, April 12. Tickets are $75 (wine and canapes included).