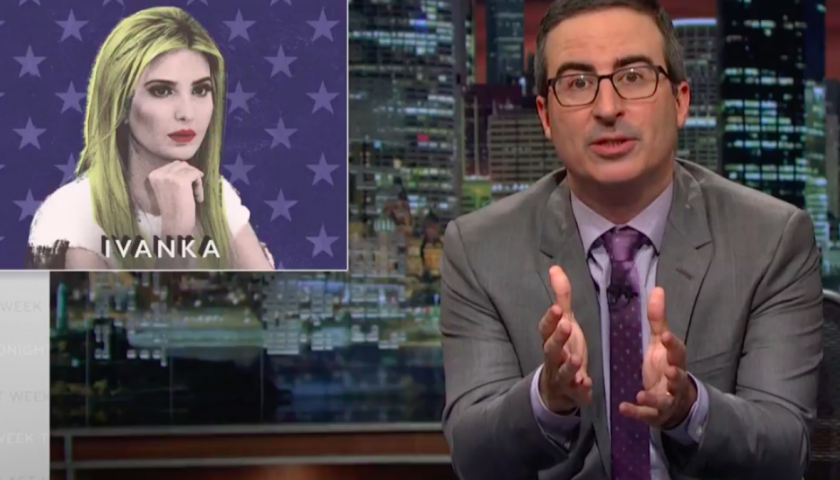 Donald Trump’s daughter, Ivanka, and her husband, Jared Kushner, are now both major players in Trump’s White House, for better or worse—and John Oliver’s money is on worse. Jared and Ivanka are frequently referred to as moderating influences on the president, but on Sunday night, Oliver took away yet another reason for liberals to sleep soundly at night by questioning that very assumption. And lest you think this is an evisceration, Oliver points out that we really don’t even know enough about the couple for a proper takedown.

As Oliver explains it, people tend to think of Trump’s children as the only thing between us and nuclear annihilation: “Basically, if Trump is thinking about pressing a button labelled Nuke Earth, they will, on behalf of all of us, guide his hand toward the button labelled Maybe Don’t.” Now that Ivanka has taken an unpaid position as assistant to the president of the United States and Jared Kushner is doing, well, everything, it’s worth reexamining that assumption that they are merely two good people trying to keep the president in check. Casting aside their potential conflicts of interest over business ties, Oliver focuses on just two simple questions: “Is Ivanka really the moderating influence that people claim? And what is in Jared Kushner’s background that justifies such a gigantic White House portfolio?”

When it comes to Ivanka, the assumption that she disagrees with her father on any issue isn’t based on much actual proof. In fact, in a recent interview with Gayle King, Ivanka avoided taking a stance on any specific issues, instead saying that her influence over time “most people won’t actually know about.”

“Oh, that’s convenient,” noted Oliver. “So we should just give her credit when good stuff happens and then blame others when bad stuff happens.” That answer lets us project whatever views we want onto Ivanka, regardless of evidence—something Ivanka herself may be encouraging.

Meanwhile, Ivanka’s husband has been put in charge of achieving peace in the Middle East, fixing the opioid epidemic, and revamping the federal government. Surely he must be incredibly an incredibly qualified individual, right? While Kushner did go to Harvard, he may have had a helping hand in the admissions process from his father’s $2.5 million donation, since his SAT scores and high school GPA reportedly did not suggest that kind of academic excellence.

When it comes right down to it, though, Jared and Ivanka’s best qualities seem to be that they aren’t Steve Bannon, which is a very low bar to clear. “If they are the reason you are sleeping at night, you should probably still be awake.”