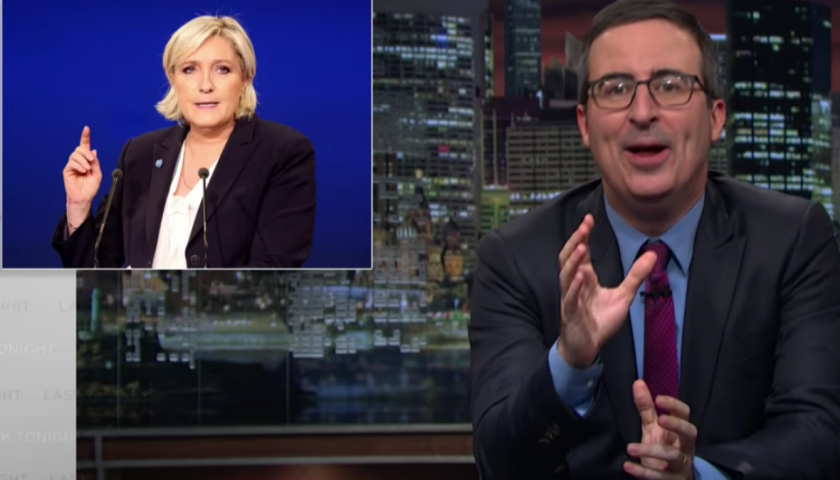 We may have just lived through an election season more unpleasant and disastrously consequential than some of us thought imaginable, but it’s time to prepare ourselves for another, according to John Oliver. In France, the presence of candidate Marine Le Pen—whom you may have heard has a lot in common with Donald Trump—has led to some pretty familiar campaign themes. “One of the frustrating things about watching this unfold from America is this feels a little like déjà vu,” Oliver explained on Sunday’s Last Week Tonight. “A potentially destabilizing populist campaigning on anti-immigrant rhetoric who rages against the elites despite having a powerful father and inherited wealth.”

Can France correct course as the U.S. could not? Oliver sees no choice but to hope for the best. Indeed, Le Pen’s victory could even render the European Union obsolete. “That’s right,” Oliver quipped. “The fate of Europe rests in the hands of a country that looks at snails and says, ‘I have got to get you in my mouth!’ ”

And so Oliver had a message for the French people, delivered in the only way he knew how: at a French bistro, in delightfully bad French, wine and cigarette in hand. His plea could best be summed up in four simple words: “Don’t fuck up, too.” But he had plenty more to his argument:

Hello, France. I know a British man speaking on an American television show about the Republic of France is basically French kryptonite. But please, listen: Britain and America fucked up. Don’t fuck up, too. Marine Le Pen is—how do you say in French? A demagogic asshole. A monstrous, demagogic asshole. You’re better than this.