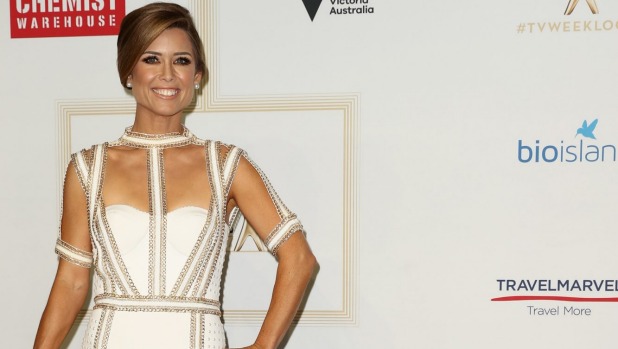 Australian newsreader Amber Sherlock made headlines around the world in January when a clip of her telling off Nine News colleague, Julie Snook, for wearing white was leaked by a colleague.

The backlash was swift and severe. She was targeted by “nasty” trolls and labelled a “villain”. She said she was “absolutely mortified and, of course, hurt”.

While some would shy away from the subject (or in this case, colour) in the hopes that it would never be spoken of again, the newscaster did the exact opposite, turning the situation on its head in style.

Sherlock rocked up to Australian TV’s night of nights, the Logies, on Sunday in an eye-catching, white Jason Grech number with gold detailing and a foot-long train that went straight onto the best dressed lists.

When asked if this was a possible strategic sartorial statement to her detractors, she laughed: “Not quite that, but I had to, right? I couldn’t shy away from it.”

“I just want to show that I have a sense of humour and I can take it on board.

“At the end of the day, I was the subject of something absolutely extraordinary which no one could ever have foreseen, and I can laugh at myself too,” she said.

But that’s not the only reason.

“I also love white and I don’t want to stop wearing it. You got to own it,” she laughed again.

While she’s been accused of rivalry, she said there’s no such thing between networks on Australia’s “night of nights”.

“Believe it or not, we are all friends, even though sometimes people try to say otherwise. With the networks, of course, there are serious ratings games at stake, but in terms of individuals, we all get a long really well,” she said.

She added: “For me, it’s even a great opportunity to see my Nine colleagues. I know I see them everyday, but it’s great to get out together.”

Sherlock headed to the exclusive Channel Nine after-party, that only welcomes the network’s talent, following the awards ceremony and said she wouldn’t rule out swinging her train around later in the night.

“I don’t think I will get too boozy, I have two small children that I am returning home to tomorrow but I’ll have a few champagnes. I’ll have some fun,” she said.

Her main concern at the end of the night: “I’ve been sewn into my dress, so I have no idea how I am going to take it off.”