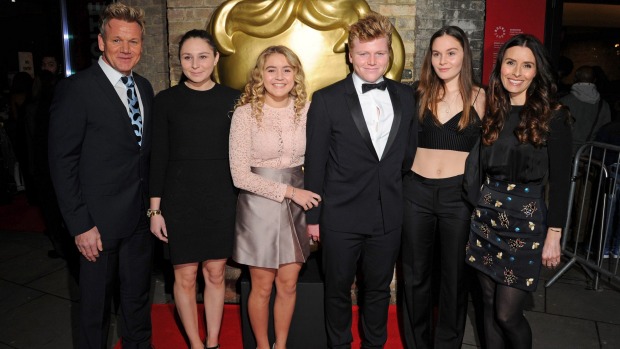 Straight talker Gordon Ramsay says he’s not interested in the fortune he’s created, and that he won’t be leaving the bulk of his fortune to his children when he dies.

Gordon and his wife Tana believe in teaching their children to have a solid work ethic and not to expect things to be handed to them.

Kids Matilda, 15, Jack and Holly, 17, and Meg, 18, all earn their own money, and are rarely allowed to eat in Gordon’s restaurants. “I’ve never been really turned on about the money,” he told The UK Telegraph. “That’s not my number one objective, and that’s reflected in the way the kids are brought up.

“Last time we went to Royal Hospital Road (Gordon’s flagship restaurant in London) was for Megan’s 16th birthday, and that was the first time we’ve ever eaten there with the kids. They have served the Chelsea pensioners there for Christmas lunch, but not eaten there.”

This carries over to holidays as well. “They don’t sit with us in first class. They haven’t worked anywhere near hard enough to afford that. At that age, at that size, you’re telling me they need to sit in first class? No, they do not. We’re really strict on that.

“I turn left with Tana and they turn right and I say to the chief stewardess, ‘Make sure those little f…ers don’t come anywhere near us, I want to sleep on this plane,’” he says. “I worked my f…ing arse off to sit that close to the pilot and you appreciate it more when you’ve grafted for it.”

The tough stance seems to be working, with all of the children involved in charity work. Meg is about to run the London Marathon to raise money for her chosen charity. Gordon comes from a working class background himself, with an abusive father. He moved out of home when he was 16.

“Tana came from a super set-up, and I’m just educated rough from a council estate,” he says. “So we meet in the middle and the kids bounce off both of us. They have a completely different life than I did growing up. I worked my arse off to get out of the s… mess that I grew up in and they’re grateful, they’re not spoilt.”

“Meg’s at uni and has a budget of 100 pounds ($180) a week; the others get about 50 pounds a week and they have to pay for their own phones, their bus fare. The earlier you give them that responsibility to save for their own trainers and jeans, the better,” Gordon says.

And whatever his children end up choosing to do in life, they won’t be relying on an inheritance from Dad. “It’s definitely not going to them, and that’s not in a mean way; it’s to not spoil them,” he says. “The only thing I’ve agreed with Tana is they get a 25 per cent deposit on a flat, but not the whole flat.

“I’ve been super lucky, having that career for the last 15 years in the US. Seriously, it has earned a fortune and I’ve been very lucky, so I respect everything I’ve got.”

Gordon Ramsay made around US$54 million last year – about the same as Beyonce.