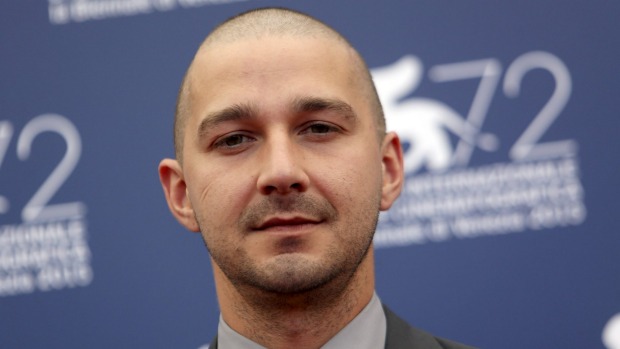 Obviously, it’s a wonderful image, someone reclining in some empty mall cinema in Burnley, a king or queen in a puddle of popcorn, legs cradled across the row in front, eagerly anticipating LaBeouf’s latest performance or confusingly wondering where Emma Watson and those talking candlesticks are.

The film, as the details go, was released in just one theatre in the UK, largely ushered to DVD and streaming sites amid horrible reviews in the US. But is it really that bad?

Well, for about a solid hour you might think everyone’s got it horribly wrong. Until the last 20 minutes jump the shark from intimate drama to trash movie nuttiness.

For a while, it’s a family drama masquerading as a war film, scenes lingering on the day-to-day stress felt by military families. The film intimately charts the quartet’s relationships, DP Shelly Johnson’s camera lingering elegantly over shoulders, eyelashes.

There’s a focus on the constraints of masculinity too, the way Drummer’s tenderness, on display in early scenes with Johnny (the military lingo “man down” takes on a different meaning, a substitute “I love you” among pent up dudes), is drilled out of him by his Marines training, echoing LaBeouf’s earlier, more successful collaboration with director Dito Montiel, A Guide To Recognising Your Saints.

“I don’t know why everyone hates this…” you might think to yourself for about 70 minutes – until the odd kicker hits 20 minutes from the end.

After a horror attack on duty and an uncomfortable discovery at home involving his wife, Drummer’s personal struggle becomes a flashy descent into madness, and Montiel’s shuffled off ending turns what might’ve been a subtle treatment of military PTSD into an embarrassing B-movie. Even M Night Shyamalan would be ashamed of this “twist”.

LaBeouf’s often unfairly maligned, largely for not just staying in his lane, daring to pepper his Hollywood career with excursions into performance art, like #AndInTheEnd, last year’s two-night fan-meet at the Sydney Opera House, and #HeWillNotDivideUs, the more recent exhibition that saw him repeatedly chanting the mantra over a livestream in protest of Donald Trump’s presidency (at least he punched a Nazi at that one).

As an actor, he’s always been consistently watchable (man, I’d even give him a prize for Constantine). His performance is ridiculously natural, charting Drummer’s shift from idealistic soldier, a sense of duty fuelled by Bill O’Reilly news reports, to outright insanity, his hard-lipped intensity replaced by shifty-eyed suspicions and wiseass mumbles.

But his dedication turns humiliating under Montiel’s closing shtick, like a Nicolas Cage gig if he wasn’t in on the joke. I have no problem with the director’s heavy-handed sentimentality (like a cut from a dead Afghani boy to Johnny’s 8th birthday celebrations amid swelling strings) or the film’s unnecessarily confusing episodic structure, but that ending is indefensible.

A ticker at the end of the film solemnly informs us that “1 in 5 veterans of the Iraq and Afghanistan wars are diagnosed with PTSD”, as though the film just honoured their struggle, rather than exploiting it for cheap movie thrills.

So yeah, there’s your $12.50 box office run. Someone might want to revisit those figures, though – as the credits rolled, I can imagine that solitary viewer in Burnley might’ve requested a refund.

Man Down is coming to on demand and DVD/BluRay in NZ soon.