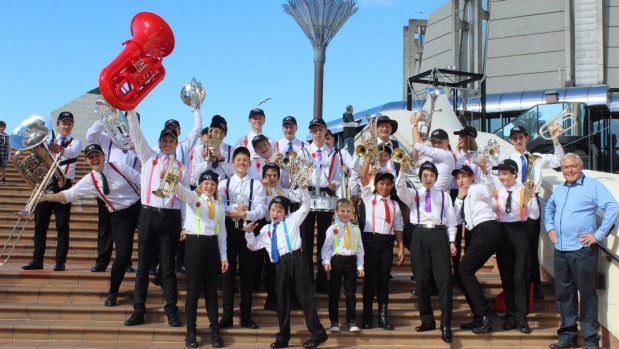 Plastic and not brass instruments may be the future of junior brass bands.

The new technology was trialled by the junior Blenheim Brass Band at the New Zealand National Brass Band Championships in Wellington last week.

Band leader Kevin Mosley says he and the young musicians were hugely impressed with the red plastic B-flat bass – the only one of its kind in the country – they were loaned for the show.

“It actually sounded pretty good. Plastic instruments are great for younger players because they are pretty much bulletproof, are much lighter than a brass instrument and are much cheaper,” Kevin says.

The plastic bass, for example, weighs just a few kilograms and costs $2500 compared with a brass equivalent which can cost up to $20,000, and weighs 27kg.

“We might look at getting some. I can see the day when entire junior bands play brightly coloured plastic instruments – it would look pretty cool.”

The Blenheim band, which was the only junior band at the contest and made up of members aged from 5 to 21-years-old, excelled to win the Besson Musical Instrument Ltd Silver Challenge Cup as well as the admiration of the judges and top bands.

“The feedback we had from judges and the A grade bands was amazing. One judge said he would never believe it was a junior band if he couldn’t see them,” Kevin says.

Members of the band also did well in the solo categories with six top three placings.

“If you are really giving it the curry you really feel it at the end.”

Marlborough has no lack of young people keen to play, the only limit being Kevin’s time to teach them, he says.

Cornet player Casey Lane, 17, says she started when her brother and fellow band member Keegan found an old cornet under his bed and gave it to her to try.

Miles Shearer, 13, has a similar story and was inspired to play thanks to his older brother Ryan. “I thought it sounded cool so I gave it a try.”