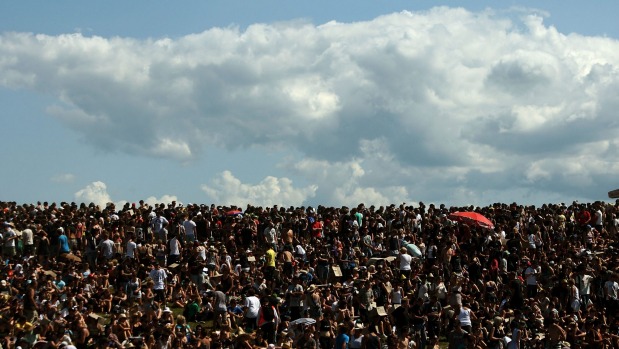 OPINION: Scenes from the Fyre Festival catastrophe brought back some chilling memories for me. You see, I am a survivor of the 2010 Sydney Soundwave festival and this is my story…

The day the final line up was announced I was elated. The 40 band metal and hard rock extravaganza included some of my all time favourite bands: Baroness, Gallows, Eagles Of Death Metal, and my all time favs, My Chemical Romance.

I should have known that it wasn’t going to be a walk in the park, when a request for information on getting tickets for the Sydney show in New Zealand was met with a metaphorical punch in the nuts: “Move to a real real country.”

Undeterred, I had the $120 tickets sent to a pal in Sydney, bought my $300 flights and sat back to await the big event.

Only a band as vitally import to my spiritual well being as My Chemical Romance could have compelled me – then a poor journalism student destined to become an even poorer journalist – to part with $400 odd for a concert.

So naturally, two days before my companion and I were set to depart, My Chem cancelled. They were replaced by hoary old proto-emos Jimmy Eat World. Woe was us.

To Australia we went. When we arrived and told my Sydney chum where the event would be  – The Eastern Creek Raceway, 40 kilometres west of Sydney – he laughed in our faces.

It was the end of February, with in-land temperatures topping 45 degrees Celsius on occasion. I believe his exact words were, “You gon die.”

Still undeterred, we set off by train with huge bottles of water in our backpacks and our delicate Kiwi skin slathered with sun block – only to have both water and additional sunblock taken from us when we hit the gates “for security reasons”.

Empty handed we entered the race way, thinking quietly that it wasn’t all that hot, what’s all the fuss about, sheesh these Australians are so dramatic!  It wasn’t all that hot because we hadn’t yet completed the 15km cross country trek to the stages.

Let me tell you, Burke and Wills, eat your hearts out, we did that slog hard. Mostly because of the rust-red billows of dust and sand that would storm up out of nowhere, choking and blinding you every five yards or so.

Not to mention the breeze – which was about 35C hot and 79 per cent water. It was much like I imagine being licked all over by a dog with a temperature must feel, only much, much worse – there would be no swatting Australia on the nose with a rolled up news paper that day. She was relentless.

After my somewhat disappointing correspondence with the festival organisers I expected a more-than-adequate level of organisation from a “real country”. Oh, how young and foolish I was.

After discovering that the barely legible “fest guide” was nothing but a tissue of lies, we sought some shade to gather our wits and take stock – only, there wasn’t any shade.

None, in 40 square kms of dust-bowl raceway.

Well, no matter, we could get some water and hide under that one tree we saw when we arrived. Which, funnily enough was what everyone thought. There was no room under the tree.

Then organisers hastily erected a 10 metre wide sun sail in the middle of the raceway. Hurrah! Except underneath became like a scene from Hieronymus Bosch’s depiction of hell: just a seething mass of sweating contorted, scantily clad bodies, steaming and shuddering in the 10,000,000 degree heat.

I tried to wriggle my way in, but I became wedged between a 255lb Meshuggah fan who was literally foaming at the mouth, and a gaggle of All Time Low Fans who were crying and trying to call their parents. My companion had to haul me out.

The first band hadn’t even started playing yet.

The day got hotter and hotter after that, and then they added a little heat. That’s when word went round that the festival organisers had run out of water.

At one point a lone girl in a Soundwave Crew shirt came out with a box of small water bottles. She was set upon like a pound of prime steak at a dog kennel. Sensing the mood fo the crowd, she threw the box and all the bottles at the festival goers and ran for her life.

The box was torn to shreds and my companion and I managed to get a piece for ourselves. After sucking any lingering moisture off it, we used that precious bit of card for shelter. Someone took a picture of us hiding under the cardboard for the local paper. My companion cried a little bit then.

Looking back now, I don’t know why we didn’t leave. I think I thought we were lucky to get to see some of the bands we did – Gallows and Baroness were incredible that day, as were Rolo Tomassi and The Creepshow, two bands I would never normally have gotten to see.

I didn’t think of going home when a fed up festival staff member told us there might be some water from a tap behind a stone shed in the penned off bar area. We went, only to discover a green slime dripping garden tap surrounded by about 20 metal fans staring at it, each one of them wondering as I was if they had actually sunk THAT low.

(For the sake of the children, I won’t describe the bar area, but suffice it to say Hieronymus would have been doubly inspired.)

I didn’t even think of leaving when a gust of rust-dust in the face literally stole my breath away and sent me, half fainted, into the medical tent. There I spent a good hour on a nebuliser while my companion begged me not to make her go out there again.

When we finally did leave, in the middle of Jimmy Eats World depressingly Not-My Chem set, there was a sense of having survived something terrible, a sense that the two of us would be forever changed (and it’s true, my companion has never been to another festival and has altogether sworn off hard rock).

Arriving back at my chums house in lovely, clean, cool, dustless Newtown, Inner Sydney, he said we looked like we’d been beaten up in a war zone.  In a way we had.

Like others who’ve seen battle up close, I don’t like to talk about that day very much. I simply say: I am a divorcee, who once nearly died of anaphylactic shock, and has been held up at gun point… but Soundwave 2010 was the worst day of my life.