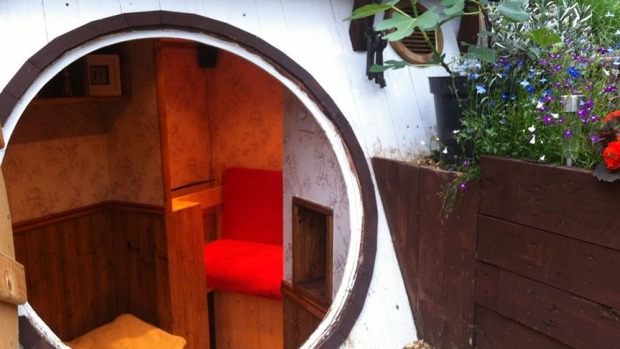 TUNNEL VISION: The three words in the English language I dread more than any others are “some assembly required”.

You discover them in small print long after you’ve bought the shelving for your man cave. So I was attracted like a magnet to How Not to DIY (Prime, Wednesday). It’s English, but I’m sure New Zealand men are as stupid as British males when it comes to rewiring the spare room or poking things into a live socket.

The testosterone that drives Brits to a bulldoze-ectomy of their garage is alive and well in Kiwi psyche.

Once the programme told me no-one got hurt, I laughed so much, I couldn’t take notes. But the disclaimer was wrong. Brains, grey matter, your upstairs bit, the stuff that inspired Einstein can definitely be damaged beyond repair. On show were males who still require some assembly.

Several incidents remain with me. There was this guy who rewired the bathroom. To show how good he was, he plugged in his wife’s hair dryer. When he switched it on, a light worked, but the hair dryer didn’t. So he turned on another light and the hair dryer sprang into action.

I imagine he said to his wife: “If you want a cup of coffee, I’ll just turn on the telly.”

The programme was full of out-of-control men with chainsaws, hammers, pneumatic drills and motorised hoists. Trees fell on houses and fences, fully grown men disappeared through holes, others fell off chairs and ladders and DIY removers tossed furniture off the balcony, injuring tenants in the floor below.

There were even some priceless moments where women hosed the inside of the car and vacuumed without turning it on.

One moment of genius stays with me. A woman spray-painted her partner’s naked bum in luminous blue. He then threw his botty against the wall, leaving an impression on the wet surface. By the time he’d done it about 20 times, the pattern looked stunning. She was chuffed while he did it for posterity.

Another showed a man trapped down a manhole with the lid on. Now, I campaigned unsuccessfully years ago to have “manhole” removed from the dictionary. It’s the most sexist word in the English language. It should be replaced by adult aperture. When the guy finally emerged he had an adult aperture where his brain should be.

If there was a point to the programme, it was to leave home improvement to the professionals and never commission another DIY series on TV again. Alternatively every kitset that leaves Bunnings should carry a health warning sticker.

It’s sometimes worth returning to a programme to see if your original opinion is accurate.

There was no balancing act in the opening episode of I Am Innocent (TV One, Tuesdays) and so I was keen to evaluate the case of Terri Frieson, wrongly convicted of manslaughter.

Terri was a young mum who confessed to causing the death of her infant daughter Chantelle and was found guilty. Later, her violent partner pleaded guilty to injuring the baby, causing a brain haemorrhage. Despite that, Terri’s conviction is still on her record.

She has a case and told her story well. But I got the strong feeling there was more to tell and the judiciary’s side of the case was never explained. That was all too convenient. If I was balancing on a seesaw then I would have nose-dived and joined the DIY team.

Hilary Knight is a 90-year-old artist and writer. He’s best known for illustrating the famous Eloise series of children’s books with text by Kay Thompson. Eventually Kay, who Knight describes as a nut job and control freak, became so possessive of Eloise she wouldn’t even share the child with the artist.

Hilary Knight’s life is presented in a fascinating doco, It’s Me Hilary, Who Drew Eloise (Soho, Tuesday). But if Kay Thompson was fruitier than a nut cake, Knight was nuttier than a fruit cake. When the TV crew visited, he was living in a world of his creation, surrounded by theatre posters, books, illustrations and movies.

He then moved into his garden to film an adaptation of his book, The Frog And the Nymph, starring his semi-naked friend, Phoebe, and a George Clooney imposter dressed as a frog.

He would have played James Pond. The movie looked very dodgy.

It may have been “for your eyes only.” Fortunately, the remainder of his talent, especially Eloise, is an ongoing gift to the world.