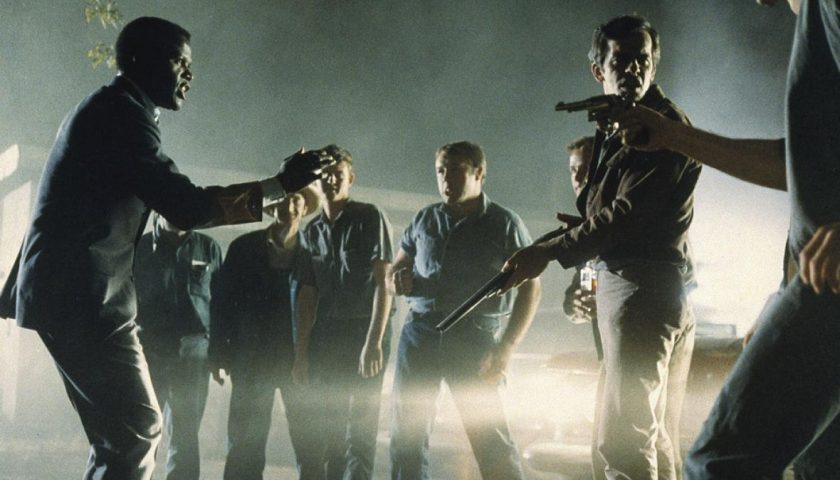 The 8th annual TCM Classic Film Festival kicked off on Thursday with a star-studded opening night screening of Best Picture winner In the Heat of the Night. To celebrate the movie’s 50th anniversary, the festival assembled an impressive array of talent, including director Norman Jewison, producer Walter Mirisch, Lee Grant, who played the widow of the deceased man at the center of the murder mystery, and star Sidney Poitier, who made an appearance in the audience. At one point during the Q&A that preceded the screening, Turner Classic Movies host Ben Mankiewicz brought up “the slap”—the iconic moment when one of the murder suspects, a racist plantation owner played by Larry Gates, slaps Poitier’s Virgil Tibbs. And Tibbs, without hesitation, slaps back.

In response to whether he was nervous about including it at the time, Mirisch said, “We never gave it up. All of us said that the heart of the picture.” Indeed, that slap resonated with black audiences in a visceral, unprecedented way, as Mark Harris recounted in his book Pictures at a Revolution: Five Movies and the Birth of the New Hollywood. Black moviegoers would erupt in rapturous applause, cheering on Poitier, while white audiences were taken aback. The reactions said it all: to see a black man defend himself against a white man, and for him to not be punished in any way for doing so onscreen was, until then, unheard of. That response, from viewers starved for a representation of black agency on screen, feels akin to the ways in which non-white audiences have responded to Get Out’s thrilling final act. (Spoilers for Get Out ahead.) Writer-director Jordan Peele turned decades of thriller and horror convention on its heads by allowing a black protagonist to live through to the end of the movie, and setting the audience up to cheer on his slaughter of the white family that has every intention of stealing his body and repurposing it for their own sadistic, racist desires. Likewise, Poitier’s slap pushed back against decades of blacks being put in “their place.”

There’s another parallel to be drawn between In the Heat of the Night and Get Out, which is the ways in which their protagonists come to represent, in many ways, a typical black experience. Later in the evening’s conversation, Mankiewicz posited that while Rod Steiger’s flamboyant, showy role as Gillespie, the town’s racist police chief won him an Oscar, it was Poitier who does the heavy lifting in the film, having to “communicate everything without speaking … with his eyes, with his jaw, and with his movement.” Re-watching that performance, it’s hard to argue with Mankiewicz. Tibbs, a detective from Philadelphia, finds himself stuck in a town dripping with unabashed racists, and he’s forced to take it all in stride, though we always know that beneath the cool exterior, there lies years of experience learning to brush off unyielding prejudice. There’s a moment early on in the movie when Tibbs, who was at first assumed to be the killer but has been absolved by his boss via a phone call, takes back his wallet and begins to count his cash to make sure Gillespie didn’t take any of it. Mid-count, Gillespie grumbles, “Your money’s all there.” Tibbs pauses, flashes him a steely side-eye, and then, without missing a beat, proceeds to start over and count the cash again. It’s a small instance, but the rhythm is so perfect, his irritation so understated.

Later, Tibbs asks the flabbergasted coroner where he can wash his hands so that he can get to work inspecting the victim’s dead body. The coroner begrudgingly nods in the direction of the sink and grumbles, to which Tibbs just shakes his head and chuckles to himself, as if thinking, “This dude right here ….” Half a century later, Daniel Kaluuya made similar choices in his performance in Get Out—the sideways glances, the double-takes, the awkward laughs meant to mask the discomfort that comes with facing a constant barrage of racism. Recall, for instance, his restrained bewilderment when an old white woman insinuates that he must be great in bed because he’s black.

In a sign that we live in a more progressive era of filmmaking, Get Out makes many bolder choices than In the Heat of the Night. In the Heat has a more conventional narrative, with Gillespie and Tibbs parting ways in a highly romanticized fashion, the former maybe a little less racist than he was before.  Based on the fervor of the cheers Get Out has elicited in theaters across the country, it seems clear that such expressions of black power and resistance still remain all too rare—but Poitier’s slap and his cool in In the Heat of the Night certainly helped pave the way.