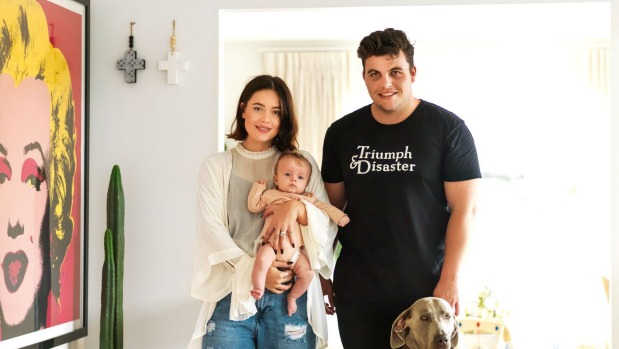 Abby and Dan Plested are the first to admit they like to do things quickly and on a big scale. After seven months of dating Dan popped the question and four months later they were married. Within the next year they’d bought a house, had a baby and acquired a dog.

“I do like to do things fast,” Abby says. It might be unusual to have a house and two children at 23 and 25, but Dan, the New Zealand and Asia sales manager for male cosmetic brand Triumph & Disaster, says: “It’s a funny thing. It doesn’t feel like a huge change, it’s just a transition into a new way of living.”

Abby was already the mum of Huey, now three, when the couple met and once Goldie Grace (now five months) was on the way, they knew they would need more space for their family of four.

“Our last place was down a long dark drive and there was no community,” says Abby.

As soon as they stepped into the house in the Auckland suburb of Grey Lynn, they knew it felt right.

“We bought it so fast that we didn’t really check the little bits out.

It wasn’t until we moved in that we found out things like our washing machine didn’t fit in the laundry, there weren’t any curtains and our lovely orange Smeg fridge was too big to fit in the kitchen. That still makes me sad, I loved that fridge,” she says.

Getting engaged so young generated a little more negativity from friends than they’d hoped: “We said, ‘We’re getting married,’ and everyone was like, ‘Oh my god, you’re so boring,’” says Abby. But rather than isolating them from their friends, their new home and family-focused life has become the preferred hang-out for their mates.

“It’s so stable and settled here,” says Abby. “It’s a different kind of stable than a flat or a parent’s home and I think people like the comfort that it brings.”

There’s always an open door at the Plesteds’ and friends fit in with the reality of family life. “It’s our home, so I’ll never apologise for Huey running around. People are always welcome and they know that this is just the mayhem that comes with it,” says Abby.

Mayhem, you’d think, would be at an all-time high with two young kids and one large dog.

But the Plesteds’ home emanates a surprising sense of calm and welcoming warmth, which prompts visitors to plop themselves down in the middle of their couch on the cushion that Abby says is the best seat in the house. “No idea why, though; everyone just sits there.”

The Plesteds think friends are drawn to their home by the honest, open way they live their lives.

Abby, who runs the blog Honey We Are More and has a rapidly growing Instagram following, is often posting about the ups and downs of their family life.

When asked if she’s hesitant about sharing so much, she replies, “No, because it’s all true. I love that it helps other people relate to their own situations and that I can answer some questions that they might feel nervous asking their close friends or family.”

The couple’s decorating style is welcoming too. They describe it as “messy and relaxed” with ample amount of pattern, texture and a splash of colour.

Clutter and mess is the one thing that drives both Abby and Dan to distraction. Unfortunately, it’s hard to avoid when you have two small children. Dan still regrets buying Huey Kinetic Sand – a sticky kind of sand you can play with inside. “The worst mistake… it was everywhere,” he says.

“And, yes, now we’ve got a dog too,” says Abby. “But our life is like that; no matter what we do it’s always go, go, go.” One dog is quite enough, she says, although Sai’s been a great addition to the family. “Huey never used to want to go outside, he didn’t want to touch the ground or the dirt, he was super-precious. But now we’ve got a dog, Huey lives outside. They’re best friends.”

They like the sense of permanence their home brings. “This is a 15-year house for us,” says Dan. “It’s not like a flat where you’re expecting to move out within the year.”

He says Abby chooses everything for the house although she disagrees. “It’s a mixture of both our styles; Dan picked a lot of the art. The Marilyn print was all him.” She admits however that she was the one who insisted the print should be huge. They bought it online, and as Dan read out the measurements Abby responded “bigger… bigger… bigger”.

“We do like to do things big,” she says.

Favourite kitchen appliance: Our coffee plunger is our life. Sometimes when people offer to bring over a coffee from a cafe, I’ll say: “Don’t worry I’ve got my plunger.” (Abby)

Best day of the week: Saturday – I get to mow my lawn. (Dan)

In the next 10 years we’d like to be: Abby will be like, “I really want to go on holiday,” but that’s something I don’t even think about because we don’t have the money for that right now, so I won’t even consider it. (Dan)  Actually, in 10 years that’s where we want to be – on holiday, with one more baby. (Abby)