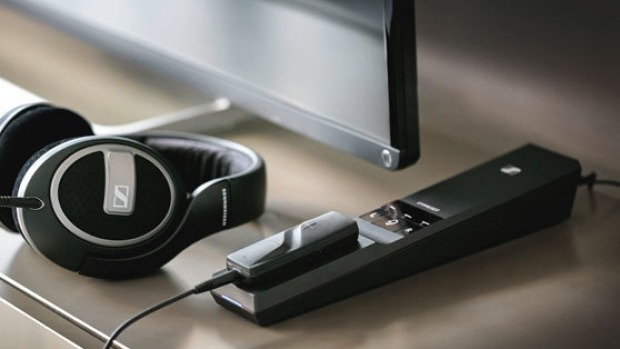 Lots of people complain about television sound quality, specifically that it’s hard to hear what’s being said amid all the background noise and dramatic music.

They usually blame modern filming, saying it places so much emphasis on ambience that voices are drowned out. And they grumpily add that modern actors mumble.

Casey Affleck aside, actors these days speak just as clearly as actors always have. The problem is usually that the listeners themselves are suffering a drop-off in hearing, most often age-related.

Sennheiser’s new Flex 5000 is aimed squarely at such people.

It consists of a larger transmitter and a smaller receiver. Connect the transmitter with your television’s “audio out” either with RCA plugs, 3.5mm minijack or, best, an optical cable, and you can dial up three different sound modes or leave the sound as is.

But there’s also a speech intelligibility function that Sennheiser claims reduces background noise and music, and amplifies voices. Sounds like exactly what all these complainers have been waiting for.

The mains-power transmitter carries a charging cradle for the portable wireless receiver, which is a bit bigger than a cigarette lighter (remember them?), weighs just 33g and has a clothing clip.

It has a 3.5mm minijack for headphones, on/off functions, a volume control and a button for activating and de-activating speech intelligibility. You can only change the sound parameters at the transmitter, and while there you can also alter the balance if you’re going deaf in one ear. Charging the receiver gives it up to 12 hours.

Transmitter and receiver operate wirelessly with a range of 30 metres. A pair of MX475 earbuds is supplied with the unit, and I appreciated Sennheiser’s honesty in pointing out that any variety of headphone can be plugged into the receiver.

Voice intelligibility operates no matter what the sound mode. It dials up voices and cuts back everything else.

Extraneous activity and music are still audible but are markedly attenuated. You’ll notice this most when you turn the feature off and all the depth, presence and realism of the original audio track comes flooding back in.

The three sound modes have quite pronounced differences. The first is bass oriented almost to the point of being muddy, with highs dialled back. The centre setting (which I suspect most people will use) reduces the lows and flattens out the mid-range and highs, and the third emphasises the highs but brings some bass back.

I tried the Flex 5000 with the worst movie I’ve ever experienced for speech intelligibility, McCabe and Mrs Miller.

Altman refused and later blamed it on Lombardo. For the first time I understood every word, but this was due mostly to having headphones on. Speech intelligibility made only a slight difference. But it worked a bit better with muddled sound, like a news reporter speaking over a demonstration and a stand-up comedian talking through the laughter.

I concluded that simply wearing headphones provides 90 per cent of the Flex 5000’s effectiveness, so I asked the folk at Sennheiser if plugging in a pair of active speakers would give similar benefits without isolating the user from everyone else.

They don’t advise it, listing difficulty in balancing two volume controls, the cost of another cable and; “negligible benefit to the user when connected through speakers”.