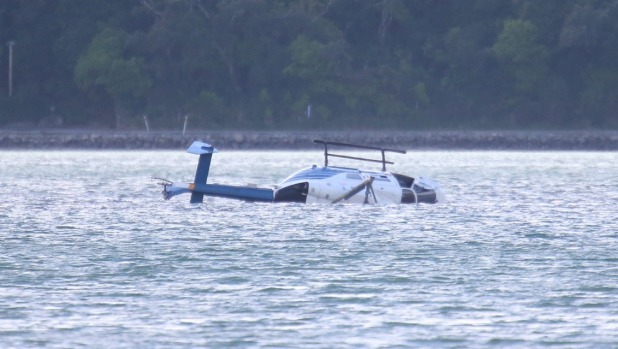 Helicopter pilot Rick Lucas has spoken of his survival after his chopper when down in the Pauatahanui Inlet, north of Wellington, describing how he ended up trapped underwater with a stuck seatbelt.

Lucas emerged unharmed after the twin-engine BK117 chopper he was flying crashed into the water near Porirua about 11.30am on Tuesday.

Afterwards, he said he immediately knew he was in trouble. “I thought ‘this was it’ … I feel a bit lucky.”

Heliforce director Dave Borlase confirmed Lucas was flying for the company. It was not yet known what caused the crash, but as far as he was aware Lucas’ flight had started out normally.

Lucas said he had been using the helicopter to lift power poles.

“I felt quite an intense vibration that got worse and worse and the machine started to rotate so I just carried out what I considered to be the normal emergency procedures – and got away with it.”

He closed the throttles and lowered the lever to try to stop the rotation.

“But it was still a significant impact and I ended up under the water. I couldn’t get the seatbelt off,” he said.

“[I] got my seatbelt off and couldn’t tell up from down until I saw some light and I was able to head towards the light and emerge in the cockpit – so I was pretty happy.”

Lucas said he was able to keep his cool.

“I didn’t panic. I almost went into some sort of state that allows you to think logically and consciously. I looked for the seatbelt, found it and, yeah, thought my leg was trapped, which was my biggest concern.”

He has been flying for 35 years and said this was the second tail rotor failure in his lifetime – but this incident was his worst.

His only injury was a cut to his mouth. The blow to his helmet had also been quite hard, but he considered himself very lucky.

“I’m thankful there was nobody else involved and thankful that when it all goes bad you don’t forget your basics and your training … I think that’s what saved me.”

Lucas said he had “absolute faith” in helicopters and planned to fly again.

He was pleased that two kayakers had paddled out to check on him.

“Andy and Rick, great guys, thanks very much,” he said. “I think they were expecting the worst, they were pretty happy to see me sitting on top of the helicopter.”

‘I BURST INTO TEARS WHEN I SAW THE PILOT’

Crash witness Reuben Kunst said the helicopter was carrying telephone poles when the cable snapped and hit the tail rotor, spinning the chopper around.

The helicopter took off from Motukaraka Point in Pauatahanui minutes before the crash, another witness said.

Georgina Russell, who lives in the Porirua suburb of Whitby on a hill overlooking the inlet, described hearing the helicopter taking off and making an “odd” sound.

She raced to her window to see it submerged in the water.

She grabbed her binoculars and was amazed to see a man was sitting on top of the chopper.

Soon after that, she watched as a canoeist paddled up to him and appeared to be chatting to the man while they awaited emergency services.

“He was just sitting casually – obviously very shocked – and a canoeist rode up to him and was just chatting to him.”

“I just burst into tears when I saw the pilot climb up out of it.”

Newton’s is the parent company that oversees work carried out by other helicopters companies. Heliforce owned the chopper that crashed on Tuesday.

“I don’t know what happened, everything was serviceable on the machine.”

Salvage efforts to float the helicopter would probably begin later on tuesday, at high tide, he said.

Hayley Presling was driving around the inlet from Whitby when she saw the helicopter flying low across the water, listing at a strange angle.

“It was quite low and I thought it did look like it was in trouble at the time – it was flying nose down with its tail up, flying towards the hills.”

She didn’t see the crash but a friend told her they had heard a chopper was in the water and she realised it must have been the same one.

“Something in me felt that something wasn’t right. It was quite odd, it didn’t look quite right.”

Olivia Marsden, who was working in the Little Black Caravan coffee shop nearby, said she heard the helicopter go down.

Emergency services rang the business immediately to get information on the crash, she said.

“We could see the pilot standing on top of the helicopter, which looked like it was lying on its side.”

Lucas was the owner of failed helicopter company, Helipro, which was put into receivership in late 2014 owing an estimated $25-$30 million.

The company closed five of its bases, including one at Wellington’s Queens Wharf, in November that year.