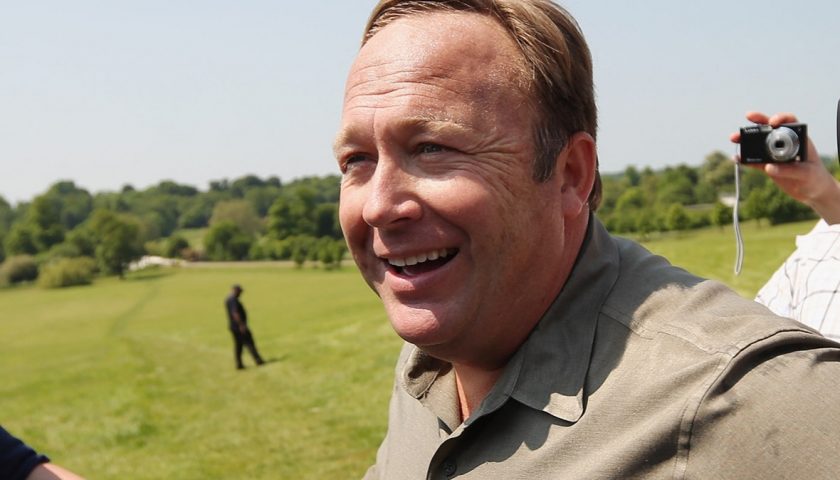 Jury selection for Alex Jones’ custody battle reveals the pitfalls of being a conspiracy theorist while living in Austin, Texas.

There is nothing funny about a sprawling, contested custody battle—no matter who your parents are, no child deserves to have his or her loved ones’ lives and habits and failings vivisected in public, before a small army of strangers. And to do this in the reality TV era of tweets and gossip and celebrity parents is cruel and unusual, any way you slice it.

That said, if there is anything more delightful than the news that lawyers in Austin, Texas, were having trouble empaneling an unbiased jury for sociopathic conspiracy theorist–turned–“performance artist” Alex Jones’ child custody trial, it’s hard to imagine. Sit with that for a moment. Alex Jones is so thoroughly loathed in his own hometown that jury selection, which should have taken a few hours, took a whole day. This is, in part, because, as the Austin American-Statesman reported on Monday, the first day of the custody trial, a full 20 of the 60 or so people in the Travis County jury pool “said they have a negative impression of the broadcaster and political personality, with 13 of those potential jurors saying they would find it hard to be fair to the man whose lawyer described him to them as a ‘provocateur.’ ” Read closely: That means about a third of the people who live in Alex Jones’ own hometown loathe him. Ouch.

Jones’ trial—wherein his ex-wife Kelly Jones seeks custody of their 14-year-old son and 9- and 12-year-old daughters—has already featured the admission, through Jones’ lawyer Randall Wilhite, that Jones is a complete phony. “He’s playing a character,” Wilhite said. “He is a performance artist.” His lawyers used pretrial hearings to argue that judging Jones’ character from his radio persona would be akin to judging Jack Nicholson based on his role as the Joker in Batman. That admission might have been better disclosed before Jones began peddling a conspiracy theory that became known as “Pizzagate,” that suggested Hillary Clinton and John Podesta were operating a child sex slave ring out of Comet Ping Pong, a pizza restaurant in Washington, D.C. One of Jones’ avid listeners, apparently not aware of the joke, decided to “investigate” on Jones’ suggestion and showed up at the restaurant full of children with a rifle, before being arrested. This may, in retrospect, also have been “performance art.” (Jones apologized last month for his part in Pizzagate, though we should assume the apology, like his initial frothing reporting, was also just “performance art.”)

It must be terrible for Jones, to have spent all these years merely acting like a colossal asshole while hiding his true good self from the world. You would suspect that his neighbors might have seen through the performance to the truth of his soul.

The jury numbers suggest otherwise, but of course there’s an obvious explanation for that. Having run the numbers through a rented InfoWars™ conspiracy-theory generator, it seems obvious that at least five of the 20 locals who claimed to hate Jones during jury selection were simply paid crisis actors hired as part of some kind of “false flag” operation the government is putting on, parallel to what it did—in Jones’ telling—in 2012 to afford cover to the Obama administration as it confiscated everyone’s guns in response to the fake Sandy Hook massacre. And at least two of the Jones haters were probably among the thousands of Muslims Jones claimed celebrated the collapse of the Twin Towers after 9/11. And statistically speaking, at least four of those 20 prospective jurors are likely among the THREE MILLION “illegals” who voted for Hillary Clinton in the presidential election. Some of them could easily fool their way into a jury pool. See, it all checks out.

But where are all the Alex Jones supporters? Easy. Well, one or two were probably lost to the killing fields of the Bowling Green massacre. And at least some would-be Jones sympathizers were unable to show up to duty because they’re being held against their will in the Walmart death camps (a precursor to martial law under Operation Jade Helm). If you just find the disappeared patriots, you will have Jones’ supporting jury!

But no matter. By the end of Monday, a jury had finally been seated for the two-week Jones custody trial. Seven women and five men will now have to determine the futures and fates of the Jones children. One dearly hopes that none of the jurors turn out to be “performance artists” as well. But really, who can know anymore?