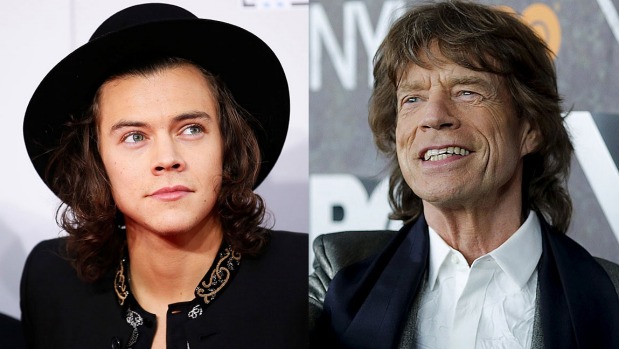 Harry Styles did little to dispel speculation he is set to play rocker Mick Jagger in an upcoming biopic during an appearance on Britain’s The Graham Norton Show.

The One Direction star has been concentrating on kicking off his acting career since the group went on hiatus, with a role in the upcoming Christopher Nolan war movie Dunkirk.

It was rumoured last year that Styles could be putting both his acting and singing skills to good use by playing Jagger in the tentatively titled biopic Exile on Main Street: A Season in Hell with the Rolling Stones, based on a book of the same name by Robert Greenfield.

And as he appeared on The Graham Norton Show on April 21, Styles did little to dispel the claims as he took part in a quick fire question round, in which he could only use facial expressions to indicate the validity of the rumours he was asked about.

Most of the questions, such as whether he had ever worked as an estate agent and if he uses a moisturiser made of sheep’s placenta, sparked a disgusted look on the singer’s face.

However, when host Norton asked Styles if he is about to play Jagger in the biopic, all he would do is smile knowingly.

The interview comes just days after the 23-year-old impersonated the veteran rocker on US sketch show Saturday Night Live. Wearing a wig and Jagger-style clothes, Styles took part in a game of Celebrity Family Feud: Time Travel Edition and poked fun at himself by saying, “Solo? Why would anyone in a successful band want to go solo? That is insane.”

The pair have long been unlikely pals, with Jagger naming Styles when asked in an interview with the Daily Mail who could match his swagger.

“I know him, he comes to see me in lots of shows. And yeah, I can see the influence,” Jagger said, adding the singer has “got it going on”.