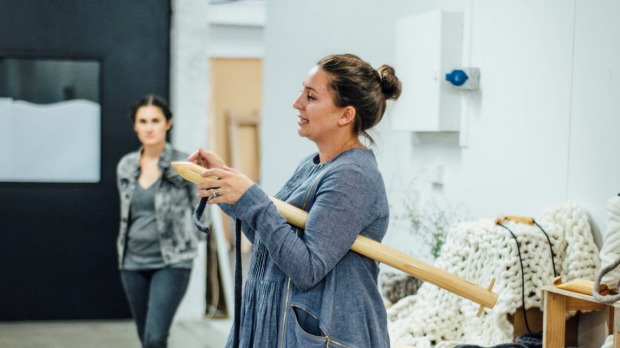 Hamilton woman Jacinta Stevenson doesn’t like to do things on a small scale.

With knitting needles a metre long and 45 centimetres thick, her knitting business called Plump & Co is creating a new trend and proving size does matter.

As well as selling giant knitting needles and crochet hooks for customers to create their own chunky knitted masterpieces, she also runs workshops, teaching people how to handle the large wool.

The workshops help people get used to the scale, she said.

Despite their Wonderland appearance, the needles are surprisingly easy to manipulate, she said.

Stevenson, who was taught to knit my her grandmother, says the size makes knitting accessible to everyone.

“I’m not the world’s best knitter, with this scale, everything looks beautiful. It still looks pretty when you’re not following the rules.

“Traditionally in knitting people feel they have to follow a pattern, we encourager a bit of rogue knitting.

The idea for Plump & Co began when Stevenson was a university student, studying textile design at Massey University.

In her fourth year of study she created an installation piece, using ripped fabric to create an oversized ‘yarn’.

After graduating she worked in the corporate world for a time, but she missed being creative, and began knitting once more – at first as a hobby, then as a business. Stevenson thought there might be a market for a new kind of knitting – to tap into a global trend, especially among millennials, for all things handmade.

Her goals for the business include managing growth, ensuring supply and strategic planning. There is potential to grow domestically and internationally, particularly in Australia and the USA.