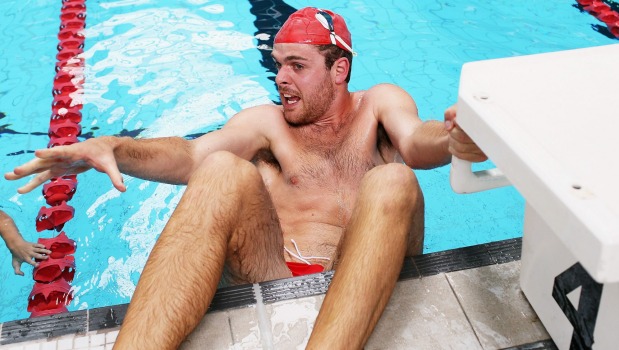 OPINION: The World Masters Games was on this week in Auckland. While I secretly think it was a wonderful event that does great things to encourage seniors to be social and play sport, I also see it as an opportunity for what is known in the industry as “cheap laughs”; so I hope these spunky grandpas have a good sense of humour!

“You have to laugh at least once a day” is something I always say. To which my editor says “Guy, you’re supposed to be a professional comedian, you need to produce more than one laugh a day”. Then I tell him I’m going for: “Quantity over quality” to which he responds that I have achieved neither and then we laugh, and now I’m up for a performance review.

So with that in mind and love in our hearts, let’s take a look at some of the highlights from the old people Olympics:

The 1000metre “Who can go the longest without saying something slightly racist or culturally inappropriate?” was thrilling to see. The earliest losers dropped out when they found the starting gun too loud and blamed “bloody Chinese people” for inventing gunpowder.

This was despite the “bang” being an electronic sound from a modern starter’s gun made in Switzerland.

Speaking of electronics the “Who can turn the internet on first without asking a relative?” was a fantastic event according to those who attended.

Some of the hottest competition, however, was in the pool where the “Who can name the most Coronation Street characters in 20 seconds?” was taken out by Deidre who called four. Coming out of the pool, the “Who smells the weirdest?” competition was taken out by a man who went by only the name “Poppa”.

My favourite event was “Who can make the best joke about their granddaughter’s ripped jeans?” when all three of the surviving competitors asked why she didn’t take them back because they’ve got holes in them. It was a tie, all three made the same joke, and they all laughed each time.

I’m going to be honest with you guys, my introduction to the World Masters Games was jaded by my lack of understanding of the word “masters”. Here I was thinking the best of the best were coming, like we’re  going to see a retired Cathy Freeman run around the track with a Zimmer frame and then have to lie down for two days.

Turns out “masters” just means anyone over 35, which seems very young to me, I’m five years off qualifying, and LeBron James could compete in less than three years. I just realised I’m only two years younger than LeBron James – that is a depressing thought.

The word “masters” implies that you get better with age. You don’t master swimming as you get older… you just get slower until eventually you’re just floating upside down in the slow lane  at the aquatic centre.

It’s like the “Weet Bix Kiwi Kids Tryathlon” but for old people. It’s “Prescription Muesli That’s Good for the Bowels Tryathlon”, also brought to you by a real estate company.

Is it weird that the World Masters Games, featuring old rich people, from mainly Commonwealth countries, is sponsored by a real estate agent? I can see the headlines next week: “Old athletes pushing up house prices in Auckland”.