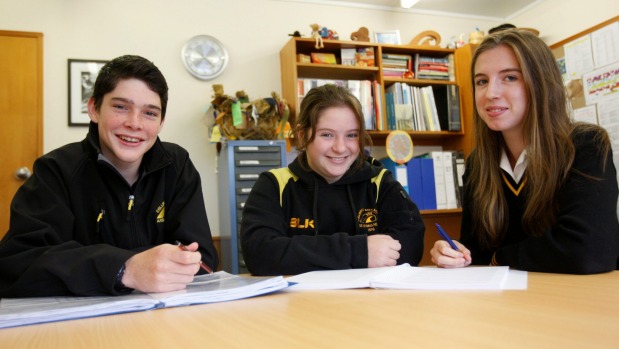 A Golden Bay school will be switching off its wi-fi network during break times to encourage more face-to-face time amongst its senior students.

Collingwood Area School’s move comes as more schools around the country are making the choice to get kids off their phones and social media sites.

Principal Caroline Gray said she had been trialling a whole-school social media ban for several weeks.

Taking it a step further, Gray said she would start switching the wi-fi network off during break times on the first day of term two.

“There’s just such a big temptation for students to be using [the internet] in all sorts of unnecessary ways,” she said. “Instead of having conversations about it, we just decided to take it away and see what happens.”

READ MORE: * Students not convinced that lunchtime wi-fi ban is the best move * School turning off wi-fi internet during lunch breaks to encourage students to talk to each other * Tuakau College blocks students’ Facebook access on school wi-fi * Digital detox: a distraction-free day in the park * The perfect place for a digital detox from the world * Mental health initiative calling on Kiwis to unplug their screens

Gray was concerned to see so many of the senior students on their phones during breaks while the sun was shining.

She wanted to see them being more active and face-to-face with one another. The excessive screen-time was creating more tension and pressure for them than they needed, she said.

“It is so hard for adolescents, or those hitting teenage years, for you to be judged for the amount of ‘likes’ you have [on Facebook]. It’s pretty tough because you are putting yourself out there on a day-to-day, hour-by-hour basis, to see how many people are going to ‘like’ your status.”

Gray said she knew the move was possible having been the principal at Raphael House Steiner School in Wellington, where it managed successfully with very little screen time.

“[We did it] because of the lack of information available about what wi-fi does long term. It’s invidious,” she said.

“I’m not suggesting we all walk around with tinfoil hats on – but in the meantime, until there’s more research, let’s make sure children have time to be children and young people.”

The school would be incrementally reviewing the move over the course of the year.

“Wellness is such an important aspect of school life. There’s all these terms being bandied around like mindfulness, but it’s actually just about being able to have the time to digest, be together, and be outside.”

Year 12 student Jessie Harland is reluctant about the idea.

“Lunchtime and morning teas are when we get to have a break from school,” she said. “But not being able to go on our phones is restricting. I like the idea of blocking social media sites, but I feel like limiting the wi-fi in school times is going to promote more kids to be using social media during class-time.”

“We have a tackle tournament coming up and in the past we did not have enough students from our year level because they rather spend time on their devices,” she said.

“We live in an awesome environment and there are lots of opportunities to enjoy it.”

A paper published by the London School of Economics in 2015 found banning mobile phones in schools resulted in a 6.41 per cent improvement overall in the schools’ performance.

Last year, a South Auckland school blocked its students from using Facebook and its Messenger app over the school wi-fi, following a segment on a television news programme about Facebook Live usage in the classroom.

In February, a secondary school in New Plymouth started turning off its wi-fi internet network during breaks. It was later reported that the students were saying the move to get kids off their phones had created more problems than it had solved.

Many students were spending all their spare money on extra data, while some were too poor to afford it, and others had even found a way to connect to another school network.

Gray said switching off the wi-fi was about the kids learning to be, and have conversations, with each other.