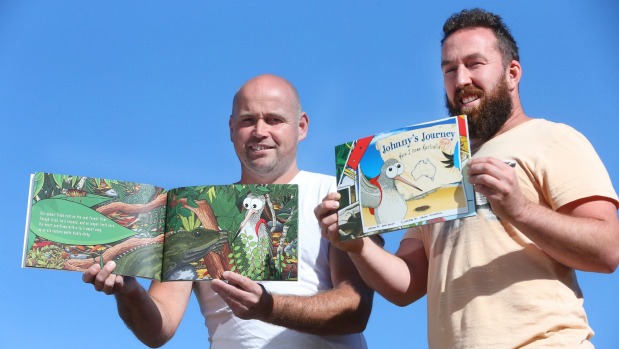 Six years after the tale of ‘Johnny the godwit’ first captured children’s imaginations, the literary character has taken flight for a second time.

Creators Jeremy McCormick and Jared Bullen are set to publish their second book about the brave little bird in Johnny’s Journey. Here I come Australia.

The friends, who will launch their latest book this month, hope the godwit’s story will entice readers enough so he can go on a third trip around the world.

Artist and illustrator Jeremy says the character has developed a lot since he first appeared in the pages of Johnny’s Journey – A Godwit Story.

“I made a few changes to him as I’ve learnt a lot since we published the first book.

“I’ve put such a lot of time into this and I want it all to be perfect.

“Initially I had no idea what a godwit even was but now I’m quite attached to him.”

Jeremy lives in Picton and Jared in Blenheim. The pair first met at Queen Charlotte College in Picton and, over the years, a friendship developed.

A self-taught illustrator, Jeremy has had previous works published but says he is particularly proud of his latest creation.

“I’ve always enjoyed art. I used to drive my parents mad as every time I made a mistake I would throw away the paper.

“I had to learn how to draw on a tablet connected to Photoshop on my computer and I only wish I knew more about it when the first book came out.”

All the locations in the books are based on the godwit’s actual migrating patterns.

The new tale takes Johnny on an adventure to Australia as he takes flight to find his friend. Along the way he meets some old friends and makes some new ones too.

Geno the seagull, a koala called Corzi and some sleepy kangaroos all make an appearance as Johnny tries to find his female friend.

Jared, a father-of-two, wanted to create a book his own children would be excited to read.

A celebration to mark the launch of the book will be held on April 22 at The Vines Village Cafe on Rapaura Rd between 10am and noon. Both Jeremy and Jared will be at the event and the books will be available to buy.

To be in with a chance to win a copy of the new book visit the Marlborough Midweek page on Neighbourly.co.nz