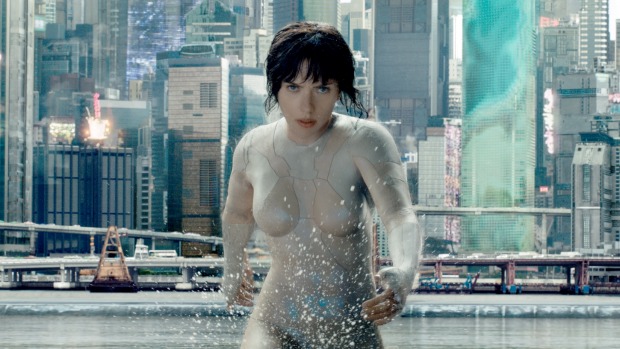 OPINION: WARNING; this article contains spoilers for Get Out. When it was announced that the classic animated movie Ghost in the Shell was getting a live-action remake and that Scarlett Johansson would play the main character, who is Japanese in the original film, the movie immediately became yet another example of Hollywood’s disinterest in Asian and Asian-American characters and actors.

Casting Johansson as Motoko Kusanagi, a role that could have been a chance for an Asian-American actress to establish herself as the backbone of an action franchise, seemed like a major missed opportunity.

But Rupert Sanders’ Ghost in the Shell, which has a different plot from its source material, actually leaves a very different chance on the table, one that Get Out, a micro-budget horror movie, grabbed and has been running with since February.

When we first see Johansson in Ghost in the Shell, her character’s name is Major, and she is the result of an experiment that has transplanted her brain into a robotic body that is pristinely white: Her surfaces are creamy and gleaming and pale. But the story Doctor Ouelet (Juliette Binoche), who did the transplant, has told her patient about her origins is false.

READ MORE: * Ghost in the Shell: Early reviews for the sci-fi film * ‘Get Out’ shows how genre can address serious issues

Major is not a refugee whose parents died, and whose body was largely destroyed, in a bombing of the boat that was bringing them to her country.

She was a young Asian woman (the movie is deliberately vague about where exactly it takes place), Motoko Kusanagi (Kaori Yamamoto, who plays the character before her brain transplant). Motoko had run away from home, living in a squat in the Lawless Zone with other young people and becoming increasingly convinced that the craze for cybernetic enhancement had dangerous implications for society as a whole.

She and the other runaways she lived with were kidnapped by Hanka Robotics, which experimented on them. Ninety-eight of Motoko’s predecessors, young people who were considered disposable, were subjected to transplants without their consent. Those transplants failed, and the shells were dismantled while the ghosts – the minds and souls of the stolen runaways – were still alive to experience their own dismemberment.

As this horrifying revelation unfolded on screen, I immediately thought of the parallels between Ghost in the Shell and Get Out, Jordan Peele’s innovative horror movie about a cult in which middle-aged white people buy young African-Americans and have their brains transplanted into black bodies in a macabre bid at life extension.

Both movies are about the horror of having your autonomy stripped from you. In Ghost in the Shell, both Major’s body and her memories were stolen from her by a corporation that saw her as disposable and saw the pain it caused her mother, Hairi (Kaori Momoi), who was told her daughter was dead, as a mere business cost.

In Get Out, some tiny fragment of the brain lives on in the black people who are sold to the white people who become parasites on them; at some of the movie’s most striking moments, the African-American characters regain control of their minds and bodies, and their agony is palpable.

But ultimately, Get Out is a richer, sharper exploration of the relationship between ghost and shell than Ghost in the Shell itself is because of its careful thinking about issues of race and autonomy.

Get Out is set very specifically in the context of American racial history history and the lingering legacy of slavery that means some white people see black people primarily as commodities rather than as humans. The attempted theft of Chris’ (Daniel Kaluuya) body by his girlfriend, Rose (Allison Williams), and her parents (Bradley Whitford and Catherine Keener) is generically horrifying because it involves grotesque experimental surgery.

The attack is memorably, potently terrifying because it is a dreadful betrayal of Chris’ love for Rose and attempts to extend trust and good will to people who treat him awkwardly in circumstances where he is uncomfortable.

Ghost in the Shell isn’t able to match the dread of Get Out, because its world-building gets awfully fuzzy awfully quickly and not simply about questions of race.

The country where Ghost in the Shell is set appears to be majority- Asian, although white people live there in large numbers and have powerful positions in both business and government, and we know that refugees have been coming to the country in large numbers. But the movie gives us almost no sense of what that society is like on any level.

Does racial difference still matter? What about class? How do those potential fissures map onto each other, especially at a moment when people are rushing to enhance themselves with robotics and cybernetics?

The film’s incuriosity about the race and demographics of its fictional country means Ghost in the Shell doesn’t explore, even by implication, what it might mean that Asian teenagers were being transplanted into white bodies. There is potentially fertile territory there.

Ghost in the Shell could have used Major’s transition to discuss skin shades and beauty standards: Why did the people who designed Major consider the perfectly optimised body to be a white one? And the racial switch could have been commentary on the ways in which Hanka Robotics, which manufactured Major and has mostly white leadership, is trying to co-opt the sovereignty of the majority-Asian nation where it is operating.

Even if Sanders didn’t want to dive deep into the political implications of Major’s involuntary transition, Ghost in the Shell would have been much more effective on a philosophical level if we had any real sense of who Major was before her transplant and who she is now, beyond someone who deep-sea-dives as a hobby and is good at shooting people.

It matters enough to Ghost in the Shell to make it clear that Major was once Motoko. But the movie falls short because we never quite learn what that means or what Motoko’s body and identity meant to her before they were stolen.

Get Out opens in New Zealand cinemas on May 4.