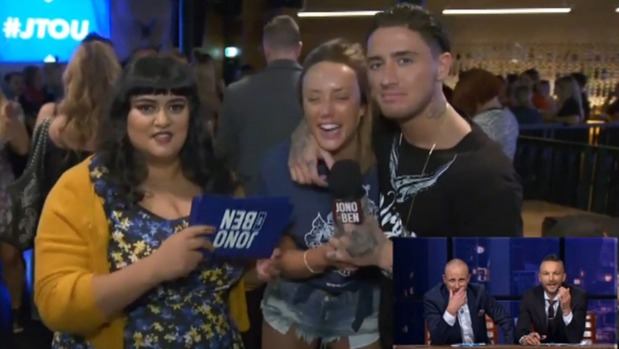 The Jono and Ben Show took a risque turn when a sketch featuring British reality TV stars Stephen Bear and Charlotte Crosby got out of hand.

The pair, in New Zealand to promote their show, Just Tattoo of Us, appeared live on Jono and Ben being “interviewed” by comedian Angella Dravid.

As soon as the interview started, Bear, 27, and Crosby, 26, started kissing. Dravid awkwardly shielded their faces from the live camera.

“We don’t even know what we’re doing here, we get paid too much money! What are we doing here,” Bear shouted.

Dravid continued her questioning, mentioning the amount of sexual tension the pair had.

It’s unclear how much of the mock interview was scripted, and how much was improvised.

British tabloids were quick to pick up on the video, calling Dravid a reporter, which she’s not.

Crosby pointed out on Twitter it was all a comedy sketch.

“This was a comedy sketch! she is an actor/comedian and the whole point of the sketch was for it to be awkward,” she tweeted using caps lock.

The pair have a new show on MTV, called Just Tattoo Of Us that would launch in New Zealand soon.